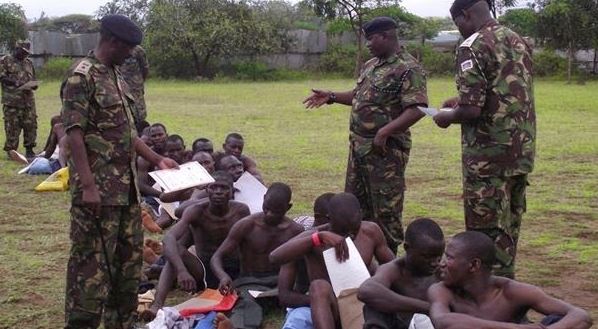 The dream of joining the military for at least 50 youths came to a crashing end over the weekend when they were arrested with fake KDF admission letters.

The Kenya Defence Forces ‘recruits’ were detained when they reported to the Moi Barracks Recruit Training School in Eldoret ready to begin their training.

According to the Standard, the KDF hopefuls were said to have been shocked when they learned that their letters were not genuine.

“Investigations into the alleged forgery are currently going on and I believe the statements they have given to the police will help us expose those behind the racket,” said Kiswii.

Mr Kiswii said detectives are trying to establish if there is a connection between these cases and last week’s incident in Eldoret town in which three people were arrested with fake military documents.

Hotel Owner Stabs Customer to Death During Altercation Over Bottle of Soda < Previous
Six Suspects Arrested with Sh21 Million Ivory in Nairobi’s Utawala Area (Photos) Next >
Recommended stories you may like: