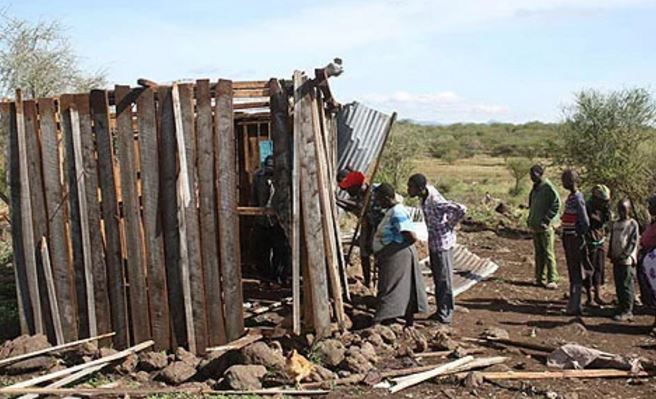 A man from Kibiru in Meru County died Tuesday after an explosive device he was handling in his house detonated.

Francis Kainga, 55, is said to have been of unsound mind and had been collecting scrap metal from Isiolo and storing them in his house.

The deceased’s mutilated body, timber and iron sheets were strewn all over the compound after the device exploded.

According to Ms Catherine Nyeera, mother of the deceased, she escaped death by a whisker after iron sheets came flying towards her.

Ms Doreen Kathure, the deceased’s niece, said her uncle who worked as a mechanic before falling sick four years ago, has been coming home with scrap metals every day.

“We were resting in the compound and could hear my uncle hitting some metal in the house. We asked him what he was doing but he said there was no problem. It was about 3.30pm when we heard a loud bang followed by smoke and the roof was blown off. We ran for our lives,” Kathure narrated.

“We suspect that he has been collecting the metals near the army barracks. I urge the police to come with bomb experts because we fear the remaining metal might be an active bomb. They should inspect this compound and the surroundings because he might have brought other explosives without our knowledge,” she added.

She said police came later in the evening and removed the body parts from the scene.

Willy Paul Tried to Attack Khaligraph Jones on Twitter. This is the SAVAGE Clap Back he Got < Previous
Hilarious Meme Compilation (Friday May 12) Next >
Recommended stories you may like: