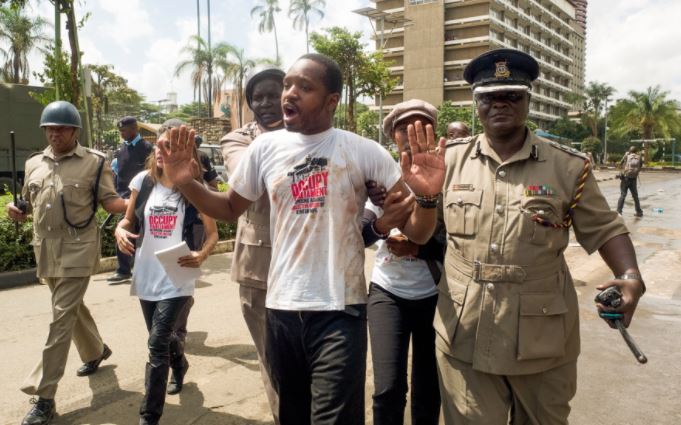 Prosecutors want a Nakuru court to issue an arrest warrant against activist Boniface Mwangi for failing to appear in court to respond to charges against him.

Mwangi, alongside Nakuru Town East MP David Gikaria and three others, is facing charges of malicious damage to a perimeter wall worth Sh13 million belonging to ENSE Limited.

They are alleged to have mobilized a group of youths to damage the wall last year on claims that the company had grabbed it from Naka Primary School.

The prosecutor, Hillary Songoyo, told the court on Monday that Mwangi and Gikaria have been derailing the hearing of the case.

“It has always been either Mr Mwangi is out of the country or Mr Gikaria being sick. The complainants are becoming impatient with the dragging of the case and we request the court to issue a warrant of arrest against Mr Mwangi,” said Songoyo.

Boniface Mwangi’s lawyer, Pascal Mbeche, told the court that his client had traveled to Zimbabwe.

He asked for the case to be adjourned, saying that the hearing could not proceed because Gikaria was unwell.

Chief Magistrate Geoffrey Oduor directed that the case is mentioned on June 29.

Janet Mbugua and Hubby Celebrate Two Year Anniversary in the Wild (PHOTOS) < Previous
Scrap Metal Dealers Arrested for Vandalizing Section of SGR in Kwale Next >
Recommended stories you may like: