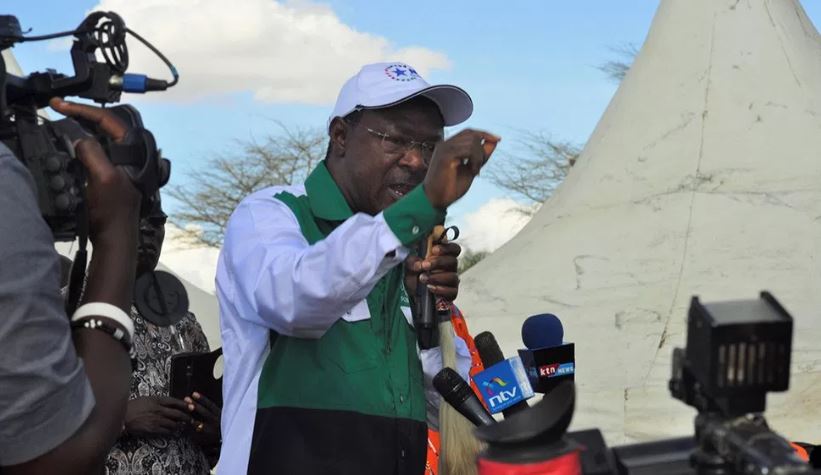 For a coalition certain of 10 million votes, you’d think the guy set to be the Deputy Premier would sit pretty and wait for his appointment.

But alas! Moses Wetangula will still vie for Bungoma Senator on a Ford Kenya ticket.

At a press conference in Bungoma Town, county secretary Peter Wakhuleka said that they had convinced Wetangula to vie “as there is no replacement who can fit in his shoes.”

“It is a sealed deal and we are going to present his name to the IEBC as an unopposed candidate,” he said.

Mr. Wakhuleka added that Wetangula would relinquish his seat if Nasa forms the next government, so that he can take the Deputy Premier position.

In essence subjecting Bungoma to a by-election.

Bomet Governor Isaac Ruto has also gone the same route, and he is expected to defend his seat on a Chama Cha Mashinani ticket. If Nasa forms the next government, he will take up the Deputy Premier position.

Analysts have concluded that the two would not want to subject themselves to a situation like Raila and Kalonzo have found themselves for 5 years. Should Uhuru win in August, they’ll still have political jobs.

However, it says a lot about their confidence in a victory, and the message they send Nasa supporters.

In Bungoma, those who have declared interest in Wetangula’s post include journalist David Makali (ANC), Bonny Nyongesa (ODM) and educationist Juma Mukhwana (Jubilee).

All The Trending Images This Tuesday < Previous
RIP Modern Coast, Mash Poa… This is the Amount You’ll Pay for SGR Train To Mombasa Next >
Recommended stories you may like: