Big Trouble for Uhuru As Another Mugumo Tree Falls 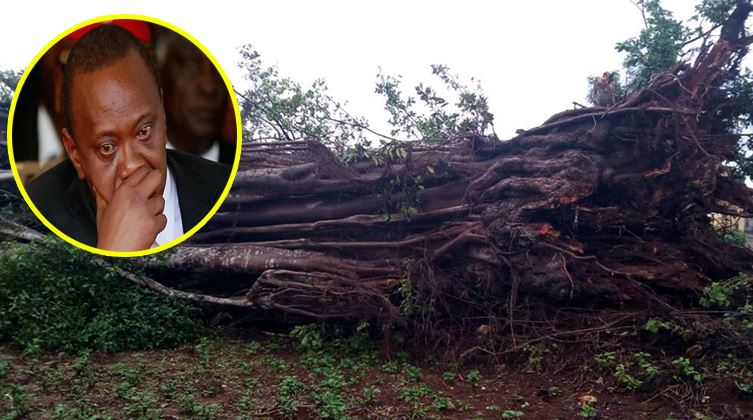 The Kikuyu community has come to associate the falling of fig trees (Mugumo) to major events in the political world.

The best known instance was when Mugo wa Kibiru prophesied that the falling of a huge Mugumo tree in Thika would mark the end of British rule in Kenya.

Worried that someone might cut it down, the British fenced it off with an iron rig, but true to the prophecy, the centuries-old tree fell in 1963.

Another one is reported to have fallen in 2002 after heavy rains.

In 2013, a 300-year old Mugumo tree fell in Giakanja village, Nyeri county. Just like the 1963 tree, this one split into two, a phenomenon known as ‘Ituika’. Elders interpreted this as a transition between old and young leadership.

While the falling of Mugumo trees is welcomed by outsiders, it is almost usually never good news to those in power.

Less than 2 months ago, another one fell in Kiamigwi, Mathira constituency, Nyeri.

In March this year, Kikuyu Council of Elders Kiambu secretary Muchai Muiruri said that the council had been informed about the occurrence, and was set to offer sacrifices and hold a prayer ceremony. Some of the tree’s branches fell last year, and in accordance to Kikuyu traditional practices, were left to rot there.

“This is a sacred tree and no one can cut its branches, nor can its branches to be used as firewood,” a villager told the Star.

Of course not everyone buys into this Mugumo tree thing, but for the supporters of Uhuru that do, it’s going to be a long 3 months.

‘What an Idiot of a Girlfriend you have’, Eric Omondi Told After his Fiancée Did This to Monkeys < Previous
The Hottest Stories on the Internet Today (Monday May 8) Next >
Recommended stories you may like: