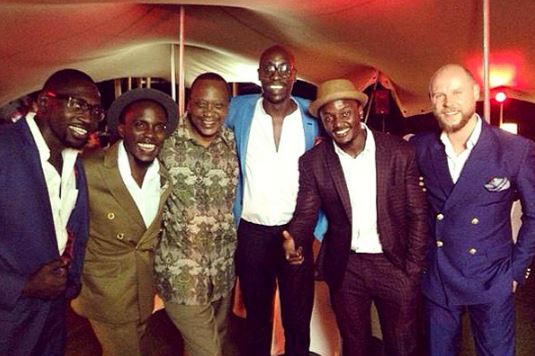 In his social media rant, Bien Aime Baraza, accused the government of stealing the idea and implementing it a year later with Jamaican artistes Richie Spice, Luciana and Etana.

Bien claimed that the idea was presented to President Uhuru Kenyatta who instructed them to give the proposal to the then Youth Fund chairman Bruce Odhiambo.

On Saturday, however, the group issued an apology to the president after Bien’s statement was “wrongly interpreted by the media”.

“We would like to issue a sincere apology to our President, Hon. Uhuru Kenyatta, for a statement which led to his goodwill and intention being wrong interpreted by the media. Again, we would like to reiterate Bien’s statement that he (Uhuru) had no hand in this as deals with millions of national issues and it is something he probably delegated.

“He was gracious enough to give us an audience, listen and support our proposal. It was not Bien’s intention to otherwise negate his kindness and are ready to issue this apology in person,” said Sauti Sol in a statement.

The Sh80 million “Studio Mashinani” project was launched by Ministry of Information and Technology CS Joe Mucheru over a week ago in Machakos County.

“It is therefore not absolutely right to lay claim to the idea because Mr Odhiambo did not bring the document to the table for government discussion and possible implementation,” he said.

The CS said he was aware of complaints lodged by the group but said it was a coincidence that the band had a similar project.

”We are in discussion with them to sort the matter,” he said.

VIDEO: Watch Padi Wubonn’s Ribracking Parody of ‘Muziki’ Dubbed ‘Uchawi Riziki’ < Previous
Hilarious: Nairobi Guy Demonstrates How to Negotiate Dowry and Get a Wife for Free (VIDEO) Next >
Recommended stories you may like: