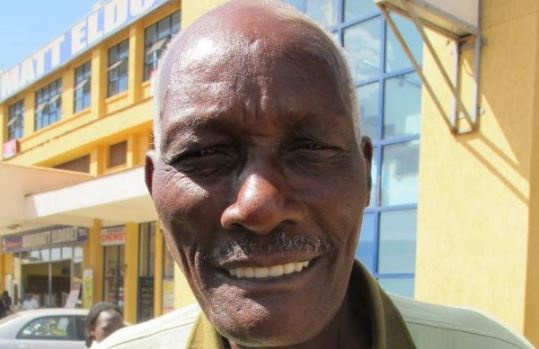 Veteran politician Jackson Kibor was last Wednesday involved in a gun incident with his son at their farm near Eldoret.

In a video that has been circulating on social media, the former KANU Chairman is seen opening fire at his son Ezekiel Kibor, and missing him by a whisker.

Kibor is seen firing a pistol while moving closer to Ezekiel, who then ducks and escapes from the area. At one point, the gun jams.

According to Ezekiel, his father shot at him when he found him supervising work on a disputed 200-acre piece of land that is part of Kibor’s expansive 2,000-acre Kabenes Farm.

“The portion of land where he found me is registered in my name and he knows it yet he doesn’t want me to use it,” Ezekiel told the Star by phone.

“Were it not that the gun failed I would be dead because he fired directly at me with the intention to kill.”

Ezekiel said he reported the incident at Eldoret police station, OB No 74/3/3/17, adding that police have not taken any action.

“They seem to be reluctant. They told me to go away and that they would later call me to record my statement,” he said.

He has accused 20 parties, including his six sons, of fraudulently sub-dividing and processing titles for his land (LR No. 8300 and 8301) measuring 1,547 acres.

At the same time, the powerful Moi-era politician is seeking a divorce from his second wife Josephine Jepkoech after 52 years of marriage citing desertion, cruelty and interfering with his ownership of 800 acres in Kipkabus, Uasin Gishu county.

Kibor’s gun drama comes in the wake of public outcry over abuse of firearms by licensed gun owners in the country.

The video of the gun incident:

I Tried Showmax and It Blew My Mind… It Has No Match < Previous
The Hottest Stories on the Internet Today (Wednesday March 8) Next >
Recommended stories you may like: