POLL: Sonko Vs Peter Kenneth.. Who Would You Vote For? 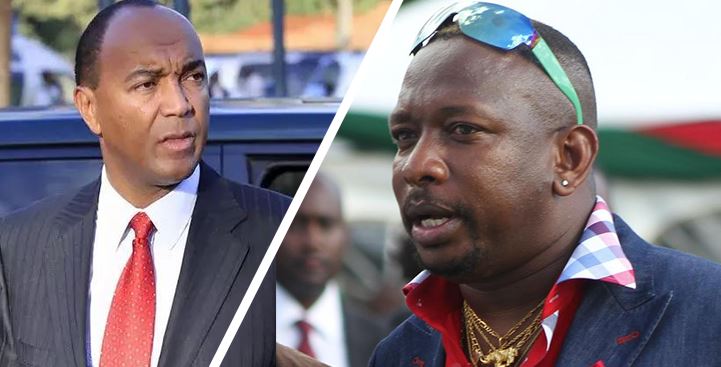 Nairobians are in a crossroad. The choices being fronted for governor is like choosing between the devil and his equally evil brother.

All indications are that Cord/Nasa will give probably the most incompetent governor a direct nomination. Having listened to people talk, I know Kidero is unwanted, even by a good number of Cord supporters. Everyone agrees their grandmother would run the city better than what we’ve seen in the last 4 years.

However, there’s a huge chunk of Kenyans who let politicians think for them, that are all over proclaiming ‘Kidero tena’.

In 2013, the argument was that a governor needs to be a CEO. It was and still remains a sound argument, and that’s the reason Kidero got votes from across the divide. A good number of Kikuyus voted for him because the alternative was Ferdinand Waititu.

Jubilee looks like they learned their lesson, and from what we’ve been hearing, top party leadership is out to deny Sonko a chance to be their candidate.

Clearly, this is not the right way to do things, because as much as anyone thinks Sonko shouldn’t be governor, democracy should be given a chance.

Most of those who watched the interview were convinced that Sonko doesn’t have what it takes to run a village, leave alone the city of Nairobi. He turned it into a shouting match, directing most of his anger and foul language to that ‘albino’ Peter Kenneth. He said that the only time he would forgive PK is if he publicly apologized for running against Uhuru in 2013 to split the Kikuyu votes.

If my memory serves me right, Uhuru also ran against Kibaki in 2002, and Kibaki against Matiba in 1992. And even without going that far, Bishop Margaret Wanjiru, whom Sonko has embraced, was in ODM last election.

In the interview, Sonko listed top government officials as being behind his woes, particularly the denial of a certificate of good conduct.

This led to a hashtag on Monday, #SonkoVsUthamaki, where bloggers (mostly Cord/Nasa) came out in support of Sonko, denouncing the ‘Uthamaki’.

In recent months, the term ‘Uthamaki’ has been used a lot, including by some very educated people. Most of them do not even know the actual meaning of the name in Kikuyu, or how sometimes it doesn’t make grammatical sense using it in certain ways. But that’s not what I’m afraid of. There’s a big likelihood that the term will be the ‘rallying call’ when time comes to discriminate against the Kikuyu. A bad seed has been sowed, and the victims will be peasant Kikuyus, not the two or three who hold the keys to the ‘Uthamaki’/ Kingdom.

Instead of addressing the real problems, in this case the individuals, we point fingers at an entire tribe. Sonko was very clear who the individuals out to frustrate him are. He mentioned them by name, yet Kenyans on Twitter turned it into a Kikuyu thing. Sonko is many things but not tribal. But now opportunists are twisting his words to spread an agenda.

Back to Nairobi politics, Jubilee remains the side to watch.

It is curious why Cord bloggers are suddenly united behind Sonko. Why do they want him to get the ticket so bad?

On the flipside, Peter Kenneth has been the darling of many. Until he joined Jubilee recently, many Cord supporters adored PK. He is seen as a competent leader, and not very tribe inclined.

I think it would be easier for PK to get votes across board than any other politician.

Some have argued that Kenyans will not accept a Kikuyu as president and Nairobi governor at the same time. This argument is actually self defeating for two reasons

1. Kidero and Raila are both Luos and vying for the two important positions. Unless the logic applies only to Kikuyu.

2. Those using this argument believe Raila will lose to Uhuru, hence the two positions will be filled by one tribe.

If Jubilee supporters vote to decide their nominee, Sonko will carry the day. Truth be told, the kind of people who actually turn up to vote during nominations, are not the ones PK appeals to.

Therefore, the likelihood of a Kidero-Sonko duel in August is very high. Obviously we also have Miguna. And because this is a cartel media, let me just give it to him. His votes will not be enough to fill Bishop Wanjiru’s church. The guy is disillusioned and just wasting everyone’s time. I still think he would make the best governor, but my thoughts are immaterial.

Now, Kidero on one side and Sonko on the other. One is an incompetent man who is widely believed to be at another level of corrupt. If I was to give it a tag, I would say the deputy high priest of corruption.

On the other side, we have Sonko. A guy so proud of his ‘E’ in Mathematics that he flaunts it to anyone that cares. A guy who believes that the solution to water problems in the city is buying more water trucks for residents. A populist who might end up bringing more hawkers to the CBD because he doesn’t want to lose votes.

Basically, Sonko has a good heart and genuinely cares for people. But his methods give me doubts on whether he is suited for Governor.

Cord supporters will say better the devil you know. But I see this as a situation where we choose between a person who has been defecating on you for 4 years until you got used to the smell, and another who might still defecate on you but with a different smell.

One of the biggest flaws of democracy is that people are not enlightened enough to make the best decisions. For this reason, Sonko will most likely be the Jubilee candidate. But if it were up to you, whom between Sonko and PK would you rather have.

Update:
An Infotrack poll released yesterday shows that Peter Kenneth does have a fighting chance in the nominations, despite Sonko’s perceived popularity. Sonko is ahead of PK by less than 3%, and this poll was conducted before his outburst on Sunday night.

RAW VIDEO: Moses Kuria Walks Out of Another Live Interview < Previous
The Hottest Stories on the Internet Today (Wednesday March 22) Next >
Recommended stories you may like: