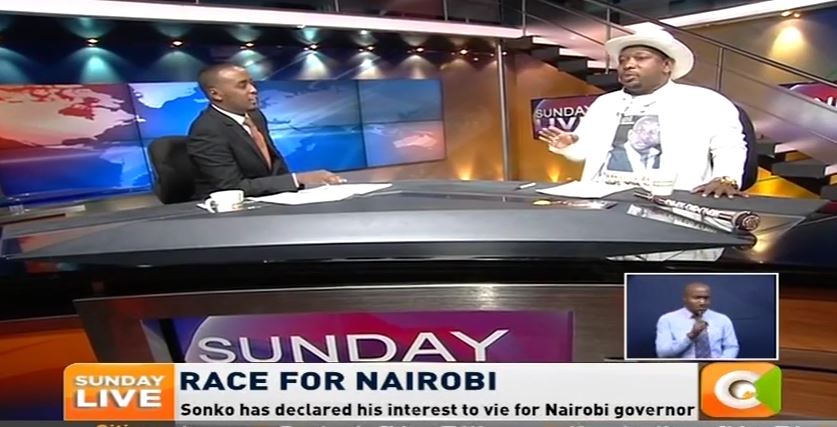 If you’ve not heard already, Nairobi Senator Mike Sonko was on Citizen TV on Sunday night. Hussein Mohamed was the obvious choice to conduct such an interview, but this was never going to be easy.

A lot has been happening in Jubilee politics and Sonko is at the centre of all of it. Last week, he came very close to missing out on Jubilee nomination after he was seemingly ‘denied’ a certificate of good conduct.

He insists there’s a section out to force him out of the race in favour of Peter Kenneth. Most of his interview on Sunday was dedicated to this, and he really said some nasty things about the former Gatanga MP.

He also spoke about his KCSE grade, saying that an E in math was not so bad in 1992. He said he is better than Peter Kenneth who go 4 ‘Es’.

However, the interview was anything but. It was basically 30 minutes of Sonko creating his own questions, answering them with so much irrelevant detail, not giving Hussein a chance to speak etc.

To me he best part was when he told Hussein to drink some water because “he was talking too much.” Probably oblivious of the irony.

He basically hosted his own interview.

Kenyans on Twitter were mostly unimpressed by a man who could very well be Nairobi’s next governor. Many questioned whether Sonko was drunk or high during the interview.

Here’s a collection of some of the best tweets.

#SundayLive I don't know what is more shocking, that Murkomen is having an affair with Lesuuda or sonko can speak English! ???

Hussein: We have to stop it there.
Sonko: Why are we stopping?
That really summarizes it all. #SundayLive

Hussein: What are your qualifications for the Governor sit?
Sonko: in 1992 i won the basket ball.
????#GamePlan2017 #SundayLive #KideroIn

You switch to Citizen TV and there is a Sonko interview… pic.twitter.com/l3d6Wgh2qW

Mike Sonko should just have stayed home and tweeted these opinions.

#SundayLive KIDERO listening to #Sonko >Finally Kidero is in pic.twitter.com/exzslpS4mK

#SundayLive interviewer:what did you achieve in High schoolSonko: I shed tears for Uhuru, secondly I became the youngest father in the world

As disappointed as iam with Sonko's live interview, I would highly advice him to avoid fermented grapes sigh!

Hussein: Do you think the Jubilee nominations will be fair for Team Nairobi?
Sonko: I did not fail in Mathematics, some have 5 Es, I had 1!

#SundayLive
Dear sonko how many irrelevant answers did you give at that interview ? pic.twitter.com/j6WdMn1gz7

#SundayLive : Hussein:how did you get a degree with a c-

Sonko:1 parking lot can accommodate 500cars what about a 10 Storey building? ?

Lakini tuseme tuu ukweli, Sonko would not be rattled if Uhuru had his back, he has the votes after all. Uhuru anataka kuruka Sonko

mum: sonko nani alivunja thermos
sonko: i only fear God and the president, thermos can go to hell

Sonko to Hussein mohammed; "Drink some water you are talking too much"

Sonko: I managed to score an E in mathematics and a C- overall…. So after I succeeded in high school…??‍♀️#DefineSuccess #SundayLive

Sonko decided to get another E during Hussein's interview on #SundayLive.

Who advised Sonko to go live on TV while under the influence of alcohol? I think he has embarrassed himself tonight. blunder

Hussein: We Going For a Short Commercial Break

Hussein: so what is your agenda for Nairobi?
Sonko: I can't answer your too many questions.#sundaylive

The way Sonko vehemently admits doing his diploma in Unity college,could tell u he is the owner of that college #SundayLive

The only way Hussein would have stopped the interview is if had gone physical lol!! Sonko came armed with rungu hahaha #sundaylive

To even think August 8th vote against Sonko will be judged by his Citizen TV's performance tonight or his E in Mathematics is LAUGHABLE ??

VIDEO: After Uhuru, Family Man Gives HILARIOUS State of his Family Address < Previous
The Hottest Stories on the Internet Today (Tuesday March 21) Next >
Recommended stories you may like: