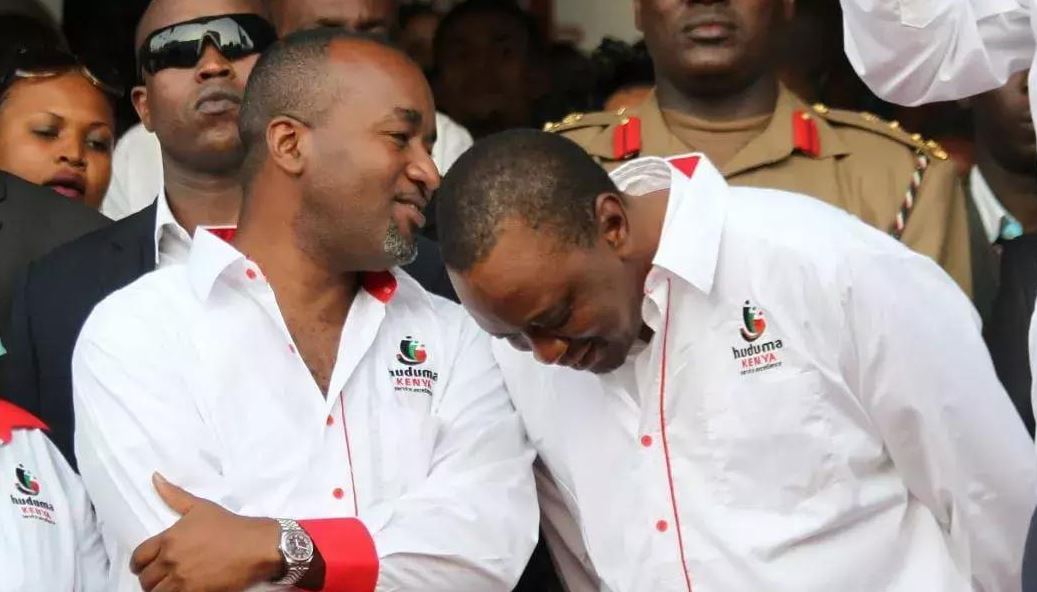 So what does the president have to gain by insulting Cord governors?

For 4 years, Uhuru has displayed restraint most of the time when answering opposition leaders. Once in awhile we’ve seen him switch to Kikuyu and call Raila Odinga names, but what we’ve seen in the last 2 weeks is quite different.

Raila is no longer his only target, and Uhuru is now comfortable abusing opponents in a language they understand.

Does he have a game plan?

It is obvious to a 5-year old that by abusing and mistreating Mombasa governor Ali Hassan Joho, Uhuru is only creating a hero. Joho will gain new supporters and admirers as the governor who stood up to and commanded the attention of the President.

This will give the Mombasa governor great influence… the kind needed to catapult him to be President or Deputy President in 2022.

So why is Uhuru doing it anyway?

The most straightforward answer is that Uhuru has simply lost his cool and the plot with it. His father was quite good at calling his ‘enemies’ names, including terms like ‘nyang’au’. It is therefore likely that the apple did not fall far from the tree.

However, some people have a different view and believe that Uhuru is fattening the pig (Joho), for slaughter yet to be seen. For a guy who has been long rumoured to be a leading drug dealer, he must have lots of skeletons.

Hypothetically, if the US’ Drug Enforcement Agency came for Joho, the more influential he is, the bigger the victory for Jubilee.

It is good to note that so far no investigation against Joho has been announced by the US or Kenya in relation to drugs. However at the same time, neither party has denied conducting any investigations.

Away from that, another theory has been put forward regarding Uhuru’s current utterances.

Everyone with half a brain will tell you that the numerous corruption scandals, incompetence and other misdoings by the Jubilee government will not prevent their core supporters from voting back Uhuru.

In the same breath, Cord is also entering the race with numerous corruption scandals; past, recent and present, touching on Raila himself, Mudavadi, Wetangula, Orengo, Kidero etc. That too will not prevent their core supporters from voting for them.

What I’m driving at is that anyone with half a brain will tell you that majority of Kenyans don’t vote with their brains. If I were to put a number on it, I would say less than 3% of Kenyans vote based on issues, track record and integrity of the politicians.

With that out of the way, those complaining about Uhuru’s utterances against Nanok and Joho, are basically the same ones who had no intention of voting for him in the first place. Uhuru is probably resigned to this fact and knows trying to win them over is an exercise in futility.

On the flipside, these outbursts may be exactly what is needed to excite/galvanize his support base. Coming just days after he paid a visit to the professor of politics, and months after Americans proved that even the most advanced democracy can vote in a mad man, this theory may not be that far fetched. 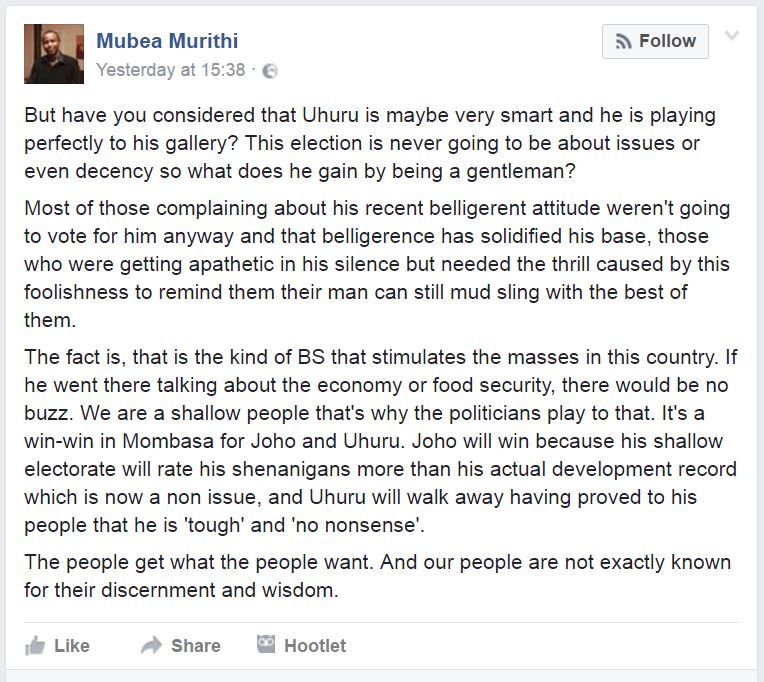 But have you considered that Uhuru is maybe very smart and he is playing perfectly to his gallery? This election is never going to be about issues or even decency so what does he gain by being a gentleman?

Most of those complaining about his recent belligerent attitude weren’t going to vote for him anyway and that belligerence has solidified his base, those who were getting apathetic in his silence but needed the thrill caused by this foolishness to remind them their man can still mud sling with the best of them.

The fact is, that is the kind of BS that stimulates the masses in this country. If he went there talking about the economy or food security, there would be no buzz. We are a shallow people that’s why the politicians play to that. It’s a win-win in Mombasa for Joho and Uhuru. Joho will win because his shallow electorate will rate his shenanigans more than his actual development record which is now a non issue, and Uhuru will walk away having proved to his people that he is ‘tough’ and ‘no nonsense’.

The people get what the people want. And our people are not exactly known for their discernment and wisdom.

Mimi?… The Best ‘False Accusation’ Memes by KOT (Hilarious) < Previous
The Hottest Stories on the Internet Today (Thursday March 16) Next >
Recommended stories you may like: