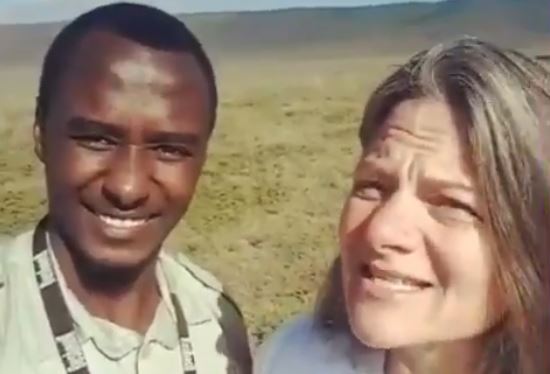 A Tanzanian tour guide whose video went viral last week for his fake translations has issued an apology for wrongly translating a tourist’s sentiments.

The tour guide, identified as Simon, has issued his public apology in another video shared on Facebook alongside the same female tourist,

According to reports in Tanzania, the guide was charged in court for defaming his country and giving false information about its people.

In the initial video, Simon had claimed that the tourist said she wanted Tanzanians to stop complaining about hunger and that they should boil their clothes, flowers and eat them.

But in the new video, the female tourist said that she and Simon were just “having fun.”

The tour guide condemned the manner in which the video was shared on social media, saying that it has jeopardized his reputation as a professional tour guide.

“I cannot tolerate any bad talk against my country, whoever downloaded the video from my Facebook account then shared it on whatsapp group did not do the right thing. The video was just a comedy, it was for fun, and I know there are people who are offended by this video. It was not my intention to hurt anyone, I apologize to my fans and followers, continue receiving entertainment, but just note my offensive jokes were misunderstood. Thank you,” he concluded.

Hilarious Meme Compilation (Tuesday February 14) < Previous
All The Trending Images This Valentine’s Next >
Recommended stories you may like: