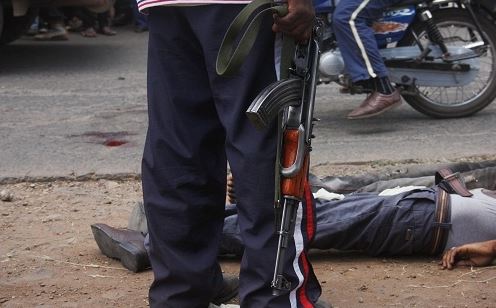 Four suspected robbers were on Monday night killed in a shootout with police in Nairobi’s Kayole area.

The four had robbed a motorist of his vehicle and beat him up before throwing him off the moving car. The carjacking took place in Dandora before the car was traced to Kayole where a shooting ensued.

“The Toyota Voxy was later spotted in Kayole where the men were all shot as they ignored orders from police to surrender,” said Nairobi police boss Japheth Koome.

The police boss added that the suspects were linked to a number of robberies in the area on Sunday.

The bodies were taken to the mortuary for post-mortem and identification.

Another suspect was killed in Shauri Moyo area and a gun found on him.

According to police, the man popularly known as Jackie was wanted over a number of robbery claims in the area. He was trailed to a hideout along Kericho Road after a botched robbery.