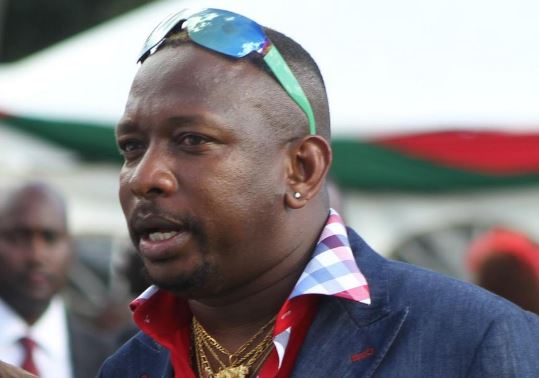 Nairobi senator Mike Sonko will not be withdrawing from the Nairobi gubernatorial race to be Peter Kenneth’s running mate contrary to reports by a local daily.

The Sunday Standard reported that the two leaders had a closed door meeting and agreed that Sonko would be Peter Kenneth’s running mate.

But Sonko has dismissed the report as ‘the joke of the year’ and accuses malicious politicians of plotting to confuse people of Nairobi.

“It has come to my attention that some malicious politicians are out to confuse our supporters and the great people of Nairobi City County that the Jubilee Party has struck a deal on a line up for the August elections.

Reports appearing in the Sunday Standard claiming that I have withdrawn from the gubernatorial race and accepted to be Peter Kenneth’s running mate or defend my senatorial seat is a joke of the year,” said Sonko in a press statement.

He urged his supporters to ignore such propaganda as no such arrangement has been reached.

Sonko added; “I swear and undertake to support whoever the party members will nominate to fly the Jubilee gubernatorial flag.”

He also asked aspirants to concede defeat and back whoever will win the nominations.

“Those invoking the name of H.E Uhuru Kenyatta for their own selfish political gains must stop forthwith.  Let us conduct mature and peaceful campaigns and let the Jubilee Party members nominate a candidate of their choice,” he said.

“However, attempting to impose any leader on the electorate by invoking the President’s name will not be tolerated and will only backfire and give our opponent Daktari yet another chance to take control of our Great City.”

All The Trending Images in Nairobi Today < Previous
Uhuru Steps Out With Another Sh2 Million Wrist Watch (PHOTOS) Next >
Recommended stories you may like: