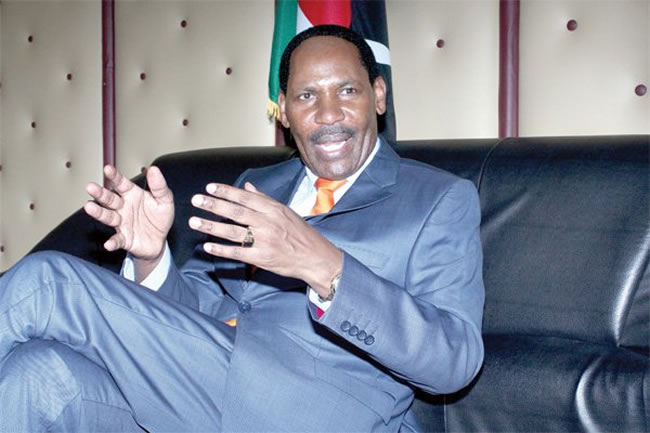 While a majority of Kenyans have been against Kenya Film Classification Board CEO Ezekiel Mutua’s stringent measures, there are those who are strongly behind the board’s regulations on what should be aired on TV.
One such person is a social media user who shared his personal experience on the effects of adult content on his cousin’s three year old daughter.
David Muchangi Mugo narrated on Facebook how he was shocked when the young girl said she wanted condoms for her upcoming birthday. Apparently, she wanted the condoms which she saw on Citizen TV to taste and eat them.
This was David’s post which was shared by Ezekiel Mutua:
“Yesterday I visit my cousin and say hi to her three year old daughter. We joke a bit with my cousin in the presence of the small daughter and then as I prepare to leave I ask the daughter what she wants in her upcoming birthday. I must say that I was very shocked when she responded that all she wants are CONDOMS. I ask her what are those then she says innocently that she has been hearing of them from Citizen TV and she needs to taste and eat them. Surely what kind of society do we live in? I support Mr. Ezekiel Mutua and KFCB in their campaigns to ban adult content, adverts and sexual topics out of the watershed period. We must ensure that content meant for adults is not aired during the watershed period. The watershed period principles should be applied by all free to air radio and TV stations to ensure that content is suitable for family viewing. Adult content can come after 10pm. CC: Ezekiel Mutua” 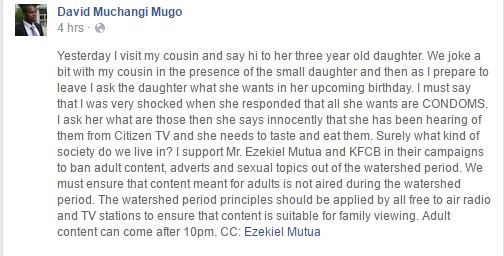 MUST READ: 16 Things That Will Happen If Ethnic Clashes Break Out in Kenya < Previous
Handsome Kenyan Cop Breaks Hearts After PHOTOS With His Girlfriend Emerge Next >
Recommended stories you may like: