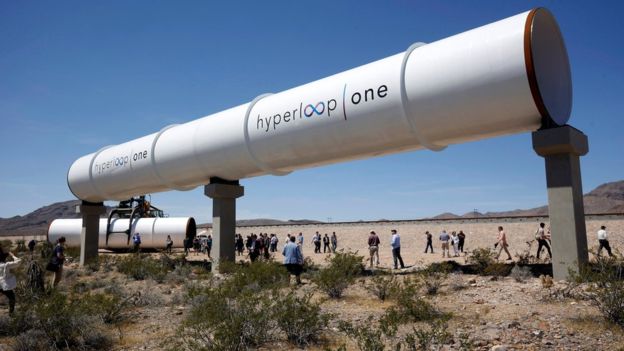 BBC – An early test of Hyperloop – a proposed high-speed transport system – has accelerated a sled to 116 mph (187km/h) in 1.1 seconds in the Nevada desert.

Wednesday’s demonstration was the first public glimpse of Hyperloop, a system that could send people and cargo through tubes at the speed of sound.
Executives hope in five years’ time people will be able to travel from Los Angeles to San Francisco in 30 minutes.
“It’s real. It’s happening now,” Hyperloop CEO Rob Lloyd said.
Telsa co-founder Elon Musk first pitched the idea in 2013, urging others to take up the proposals as he and his company developed electric cars and solar energy technology.
The technology uses levitating pods that move through a low-friction environment with electricity and magnets. The pods are designed to travel at more than 700 mph (1,120km/h).
Hyperloop hopes to start moving cargo by 2019 and people by 2021. However, huge logistical and technological hurdles remain.
The plan has detractors including James Moore, director of the University of Southern California’s Transportation Engineering Program.
“I would certainly not say nothing will come of Hyperloop technology,” Mr Moore told the Associated Press. “But I doubt this specific piece of technology will have a dramatic effect on how we move people and goods in the near term.”

Superstar Treatment: Former Mother in Law Actress Celina Gets Own Trailer in Thailand (PHOTO) < Previous
PHOTOS – Check Out how a Baby Named After the Late Fidel was Baptised at Roho Israel Church Next >
Recommended stories you may like: