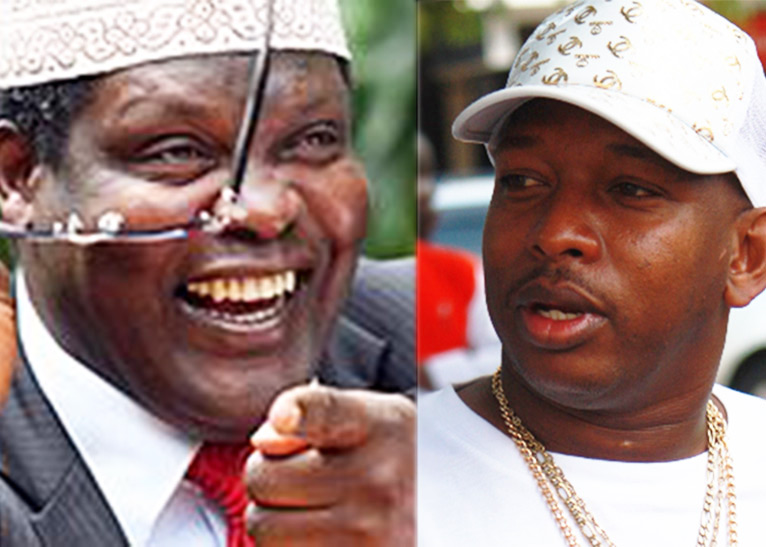 Nairobi Senator Mike Sonko has hit back at Miguna Miguna by claiming that the former senior adviser to opposition leader Raila Odinga suffers from acute dementia.
Acute dementia is a chronic or persistent disorder of the mental processes caused by brain disease or injury and marked by memory disorders, personality changes, and impaired reasoning.
The senator made the remarks on social media on Monday 23 May when a fan posed a question to him about Miguna Miguna claiming that Sonko engages in illegal drug business.
Muindi Njoroge wote: “Miguna claims you are a drug dealer… defend yourself.”
Sonko responded saying:  “The man is suffering from acute dementia. A day cannot pass without him mentioning my name. My past is an open book for everyone to read.”
Sonko also took to twitter on the same day claiming that he does not hate Miguna and would appoint him should he win the Nairobi governor’s seat in 2017. 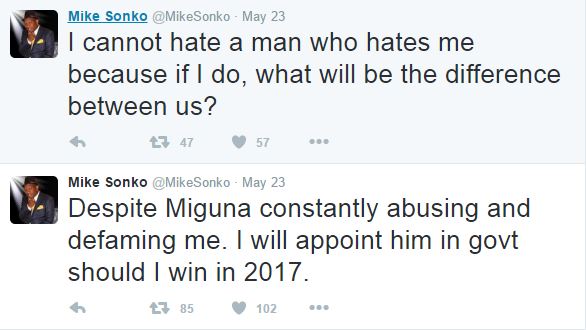 Miguna, whose handle was tagged in the tweet, retaliated: “My brother Sonko, I cannot serve under or with a member of the cartel, thief… do you understand?”
The heated exchanges come weeks after Miguna Miguna described Mike Sonko as “functionally illiterate” and a “joker who is not qualified to be anything” on KTN’s Jeff Koinange Live.
“He is not qualified to be anything. He can barely read. He doesn’t know his role as a senator. Nairobi can’t be run by people who are functionally illiterate,” He said.
During the JKL interview Miguna also dismissed other contestants. He claimed Johnson Sakaja was a joyrider and Bishop Margaret Wanjiru can only run a Sunday school.
“Who is Sakaja? What has he done? He climbed on Uhuru’s back to Parliament. Even in Parliament, he has never done anything (substantial). Even Uhuru tried to jump on Moi’s back, but he failed. He had to go back to the drawing board and work his a** off. Sakaja has to learn to work his a** off,” he said.
“Bishop Margaret should restrict herself to the church. The city is a complicated institution. It’s too sophisticated. You don’t come from running a Sunday school and think you can run that (the city), and with no training on anything.”

Police Imposters Caught on CCTV Stealing in Embakasi (VIDEO) < Previous
POLL RESULTS: Mohammed Ali Should Not Have Exposed Cheryl Kitonga on Jicho Pevu Next >
Recommended stories you may like: