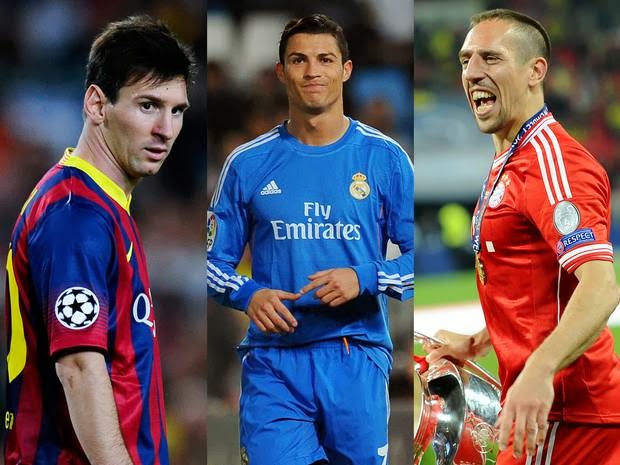 Lionel Messi, Cristiano Ronaldo and Franck Ribéry will fight it out for the title of the world’s best player after Fifa announced its shortlist for the 2013 Ballon d’Or.
Messi has won the award in each of the last four years, while Ronaldo won the award in 2008 and has since been repeatedly placed second. Ribéry has had a sparkling year for the treble-winners Bayern Munich.
Gareth Bale did not make the cut from the 23-man longlist despite scoring 26 goals for Tottenham last season before becoming the world’s most expensive player when he joined Real Madrid for €100m in September.
The winner will be revealed at the Fifa Ballon d’Or gala in Zurich on 13 January. Ronaldo is favourite for the prize after scoring 34 league goals for Real Madrid last season and guiding Portugal to World Cup qualification.
Ribéry is in contention for another award after being named Uefa’s best player in Europe for the 2012-13 season, in which he helped Bayern win the Champions League, Bundesliga and German Cup. Messi has continued to be prolific since being awarded the 2012 prize, leading Barcelona to another La Liga title with 45 goals and Argentina to a place at Brazil 2014.
The 23-man list was compiled by the Fifa football committee and a group of experts from France Football and announced on 29 October. The nominees were confirmed after a voting process that was open to the captains and head coaches of the men’s and women’s national teams of Fifa’s 209 member associations as well as to international media representatives selected by Fifa and France Football.
Sir Alex Ferguson, who retired following 26 years as Manchester United manager, is nominated for the Fifa world coach of the year for men’s football award alongside another former manager, Jupp Heynckes, who led Bayern to their treble. Jürgen Klopp, whose Borussia Dortmund side lost the all-German Champions League final to Bayern, is the third nominee.
The five-time Fifa’s women’s player of the year Marta of Brazil is shortlisted for the 2013 award alongside the 2012 winner, Abby Wambach of the United States. Germany’s Nadine Angerer is the third player on the shortlist.
The three nominees for the Fifa Puskas award for the “most beautiful goal of the year” were also announced. Zlatan Ibrahimovic’s acrobatic volley for Sweden against England in November 2012, Nemanja Matic’s volley for Benfica against Porto in Portugal’s Liga Sagres and Neymar’s shot for Brazil against Japan in June’s Confederations Cup are the contenders.
– Guardian
PHOTO – Robert Alai with Nelson Mandela Back in The Day < Previous
Mututho Raids Eldoret Strip Club, Arrests The Strippers & Shuts it Down Next >
Recommended stories you may like: