Cairo Snows For The First Time in 100 Years 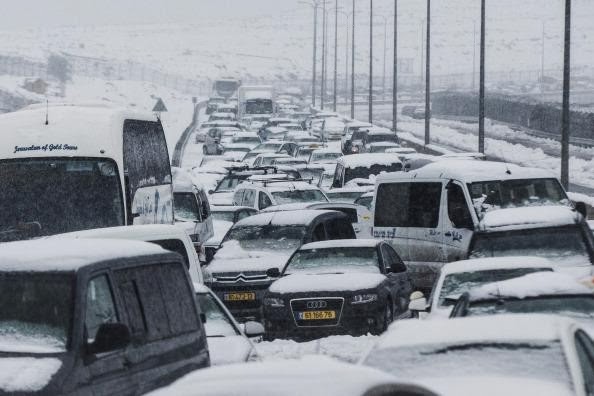 A powerful winter storm system struck parts of the Middle East on Friday to the delight of some residents but causing havoc in other locations where snow is a rarity.

In Cairo, Egypt snow fell for the first time in 112 years covering parts of the city in a light blanket of white. The scene of snow-covered domes in the normally arid climate was greeted with wonder and amazement by residents of the city.
To the southwest at the higher elevations of the Sinai Peninsula, snow fell on Mt. Sinai. Saint Catherine’s monastery at the base of the mountain reported several inches of snow, the first in decades.
Parts of Israel saw heavy snow totaling up to three feet. Jerusalem Mayor Nir Barkat told The Times of Israel, “We’re facing a rare storm the likes of which we’ve never seen.”
The local meteorological agency said it was the worst snowstorm seen since at least 1953.
The Holy City was closed to traffic and the nation’s military was called out to rescue some 1,500 people stranded in vehicles. Highways and roads to Tel Aviv, the Golan Heights and other locales were closed.
Ben-Gurion International Airport was forced to close for a period due to the snow and limited visibilities.
U.S. Secretary of State John Kerry arrived in Israel yesterday to push along stalled peace talks. Viewing the snow-covered city with Prime Minister Benjamin Netanyahu, Kerry quipped, “I have heard of making guests welcome and feeling at home. This is about as far as I’ve ever seen anything go … giving me a New England snowstorm.”
Emergency centers were established and 350 people were treated for cold-related maladies. Several cities and towns including parts of Jerusalem experienced power outages affecting tens of thousands of homes.
In Lebanon, the weather system has caused great hardship for Syrian refugees. Many live in makeshift camps lacking any real protection from the unusual sub-freezing temperatures. International aid agencies were rushing supplies to the area.
– Examiner
Vitimbi’s Nyasuguta Involved in a Road Accident < Previous
Tottenham Sacks Andre Villas-Boas Next >
Recommended stories you may like: