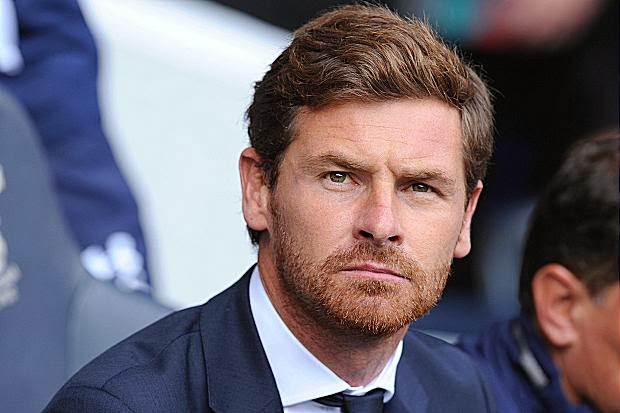 Tottenham Hotspur have announced that head coach Andre Villas-Boas has left the club by mutual consent.

The Portuguese coach, who took over at Tottenham in the summer of 2012, leaves the club following Sunday’s 5-0 hammering at home to Liverpool.
“The club can announce that agreement has been reached with head coach, Andre Villas-Boas, for the termination of his services,” said a short statement on the club’s official website. “The decision was by mutual consent and in the interests of all parties.
“We wish Andre well for the future. We shall make a further announcement in due course.”
Villas-Boas leaves White Hart Lane with Spurs seventh in the Premier League table, five points off the top four and eight points off leaders and local rivals Arsenal.
The loss to Liverpool was Spurs’ third heavy defeat this season, with October’s shock 3-0 defeat at home to local rivals West Ham putting a dent in their then-impressive defensive record long before they were humbled 6-0 at Manchester City in November. Their latest heavy defeat heaped the pressure on the youthful Spurs boss as he met the media for what proved to be the final time at White Hart Lane.
“Regarding my position it’s not me who decides. I can only work to make things better,” he told his postmatch news conference. “I assume the responsibility of the failure. I won’t resign and I’m not a quitter. The only thing I can do is work hard with the players and try and get the results back on track.”
Villas-Boas was not afforded the time he craved to get results back on track as his dismissal came swiftly after the Liverpool defeat, with former Tottenham midfielder Jamie Redknapp among those who expected the move from Spurs chairman Daniel Levy.
“Daniel Levy likes sacking managers, so this is not a surprise,” Redknapp told Sky Sports. “I don’t know if they have someone else lined up, but we have to be honest and say he was very lucky to get that job after what happened to him at Chelsea.”
Last season, Villas-Boas led Spurs to their record points haul for a Premier League campaign with 72, but that total was not enough to see them return to the top four and earn a Champions League place. His overall record in the job makes for impressive reading, as he has averaged 1.83 points per league match, the highest of all Spurs bosses in the Premier League era.
However, the club’s ambition to regularly compete in the Champions League appeared to be under threat as Villas-Boas lost the confidence of the club’s supporters and ultimately the White Hart Lane board.
The proceeds of the world-record sale of Gareth Bale to Real Madrid was spent on a host of attacking players such as Roberto Soldado, Erik Lamela, Christian Eriksen and Nacer Chadli, but Villas-Boas was unable to get technical director Franco Baldini’s summer recruits to gel on the pitch quickly enough for Tottenham’s liking.
Former England manager and current Russia coach Fabio Capello is among the bookmakers’ favourites after the Italian was spotted in the crowd at White Hart Lane watching the Liverpool game on Sunday. Swansea boss Michael Laudrup, Guus Hiddink, Spurs technical coordinator Tim Sherwood and Ajax boss Frank de Boer are also thought to be among the potential candidates.
– ESPN
Cairo Snows For The First Time in 100 Years < Previous
Is UEFA a Den of Corruption? This Twitter Account Predicted Champions League Draw 24 Hours Earlier Next >
Recommended stories you may like: