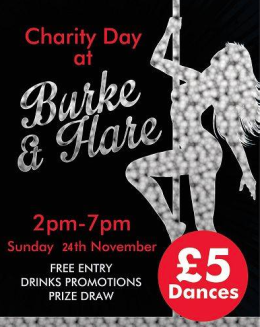 Here’s a new thing to write off this tax season: Lap dances for charity.
A Scottish strip club offered half price dances Sunday to raise money for an anonymous, reportedly seriously injured friend.
“I don’t know if it’s an Edinburgh first but we thought it was a great way to raise money for charity,” said the Burke and Hare’s spokeswoman to Metro UK.  ”[It] certainly isn’t going to be your average  Sunday afternoon tea and cake sale.”
Unless your tea and cake sale involves g-strings and grinding, in which case it’s exactly the same thing.