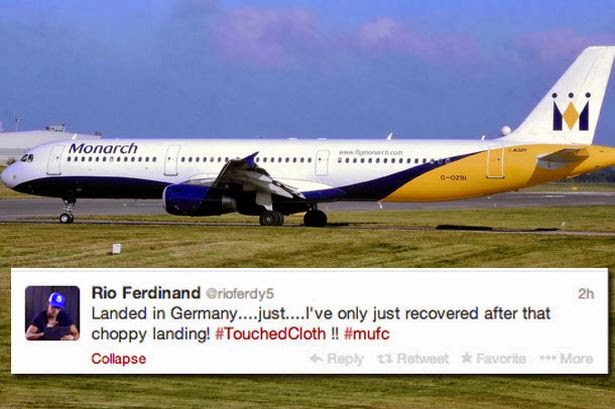 Manchester United were involved in a mid-air plane scare when their pilot had to abort landing seconds before touching down in Germany, writes David McDonnell in Leverkusen.
A plane on the tarmac at Cologne airport forced the pilot to abort landing just 400 metres above the runway and land at the second attempt.
Over the intercom, the captain told those on board the Monarch Airbus 321 they could not land because the runway was blocked, but assured them they was no danger.
The plane, carrying the Old Trafford giants’ squad, manager David Moyes, his coaching staff and club officials, eventually touched down safely at 5.30pm local time – 10 minutes behind schedule.
After landing, a tweet from Rio Ferdinand made it clear the United party had been on edge:
One member of the United camp on the plane said: “It was quite frightening. We were coming into land when we had to pull up suddenly because it appears there was a plane on the runway.
“The captain came on the intercom to apologies for what happened and then we landed safely.”
United have flown to Germany to take on Bayer Leverkusen in the Champions League group stage on Wednesday.
The club lost eight players in the 1958 Munich air disaster, which claimed the lives of 23 people in total.
Munich survivor Bill Foulkes, who made 688 appearances for United, passed away this week, aged 81.
Ferdinand and his teammates will wear black armbands for the Leverkusen game in a tribute to Foulkes.