11 Tips To Stop Women From Nagging 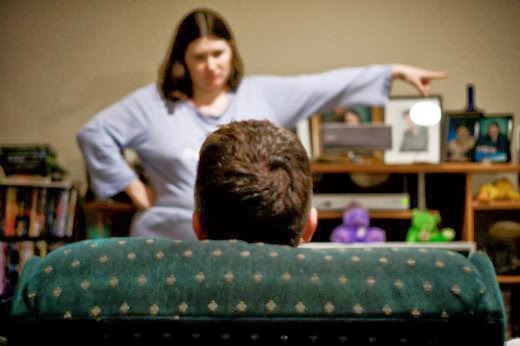 Shrew, hag, vixen, well, those are just a few names women are called when they rub their men (rubbing men, eh?) the wrong way.

But, a far more universal tag is that of a nag. Yes, women are such nags, they go on and on, and they bring it up again…. If only someone knew how to put a zip on them when they get into the whine-complain route. Well, men of the world rejoice for you can actually put the zip- now don’t start looking down there! – if you follow these 10 golden rules:

1. The place for soaking wet towels is not the bed.

2. Loo etiquette are simple, and easy to follow. Just take care to put the seat down, caps of shampoo bottles, toothpastes, lo your various vanity lotions and potions need to be put back after use. And the bathroom need not resemble a waterloo after you’ve used it!

3. Women like to talk, and are generally not satisfied with grunts, monosyllabic responses, or, worse still, pretended and convenient deafness

4. Thanks for offering to help in the kitchen, but, do remember to not leave the kitchen as a disaster zone after you’re through with your creative culinary experiments.

5. Taking care of the kid is not plying them with goodies, switching on the cartoon channel or putting the Winnie the Pooh DVD. If only child care were that simple

6. When going all moony-eyed over the leggy beauties on the television, take care to be subtle instead of being so blatantly brazen

7. If praising another woman’s beauty, assets, or other attributes like her cooking skills, don’t get extra effusive and carried away. Keep it short, academic, and low-key!

8. Know that our interest in men is also academic… helps us to do comparative studies!

9. PMSing happens for real! It isn’t an excuse to scream, and holler. So, know those dates, and be all sweetness and light.

10. We are the female of the species and we need time to preen and prime ourselves to look our best. So, don’t grudge us our time in front of the looking glass.

REVEALED – A Drone Was Used To Take The Aerial Photos of Machakos Stadium (PHOTOS) < Previous
Construction of High-Speed Railway Line To Begin This Week Next >
Recommended stories you may like: