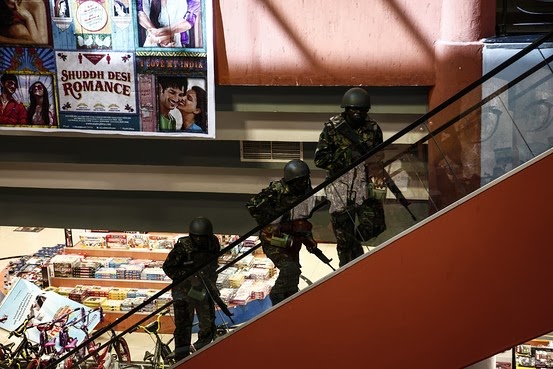 The weekend brought encouraging news in the international fight against Islamic terrorism, news that was particularly welcome in Kenya, the country I lead. American commandos in Libya seized Abu Anas, a suspect in the 1998 bombings of American embassies in Kenya and Tanzania. In Somalia, U.S. Navy SEALs targeted a senior leader of al-Shabaab, the al Qaeda-affiliated group responsible for the horrific recent attack on the Westgate shopping mall in Nairobi. The raid in Somalia was reportedly abandoned, to avoid harming civilians, before the al-Shabaab leader could be captured. Some al-Shabaab members were killed, but it wasn’t immediately clear whether the targeted senior leader was among the casualties.
All of us who strive to fight Islamic militancy should applaud these efforts. In particular, it is clear after the Westgate attack that the world must unite as never before in the fight against the spread of violence by al-Shabaab outside Somalia.
Before the Islamist militants’ attack in Nairobi, the Kenyan military along with our partners in an African Union force last year successfully removed al-Shabaab from Kismayo, a coastal town in Somalia, allowing the democratically elected Somali government to take control. This port was a crucial source of money for the terrorists, who extorted legitimate traders. Yet al-Shabaab was still able to strike Nairobi, the business heart of East Africa, where Africans, Americans, Europeans and Asians live side by side. Al-Shabaab appears to be shifting from a strategy of insurgency to sporadic terrorist attacks both within and beyond Somalia’s borders.
As I vowed last week in the wake of the attack, Kenyan troops will remain in Somalia to defend the government until al-Shabaab no longer poses a threat to its future and to regional security. But countries in Africa and beyond who might be targeted by al-Shabaab’s exported terrorism must consider what else should be done to combat the group. Why do young men and women join al-Shabaab and its wider networks? How can we cut off funding for this terror organization?
Though it is not always the case with Islamic terrorists, one of the root causes for Somalians to join al-Shabaab is poverty. For those who are young and poor and searching for identity, religious fanaticism can prove alluring. The testimony of former members of al-Shabaab reveals that many were groomed through offers of money or the simple promise of a daily meal, while their minds were bombarded with a violent and distorted world view.
For this reason it is crucial that foreign business investment continues to flow to Kenya and its fellow members of the East African Community, Burundi, Rwanda, Tanzania and Uganda. It is through economic empowerment that young people in the region who might be vulnerable to the al-Shabaab message will have hope for a better life. At the same time, we in Kenya are increasing security measures to reassure international investors and their staff located in Nairobi.
Al-Shabaab preys on the poor for recruitment, but the group itself is well-financed. Kenya and our international partners have identified three routes of funding: the illegal trade in ivory, the diversion of international remittances intended for others, and the theft of money intended for mainstream Muslim organizations.
Only weeks before the attack on Westgate, the government of Kenya launched a campaign calling for a global moratorium on ivory trading. While we are already investing more in antipoaching measures, this illegal trade—for which al-Shabaab acts as a facilitator and broker—cannot be curtailed without an offensive against overseas buyers. The support of foreign governments and nongovernmental organizations in this effort is essential. In the coming months, Kenya will seek to bring all these participants together to devise and implement a global plan to end a business that endangers our wildlife and bankrolls attacks on our people.
Regarding the diversion of remittances, banks in the U.S. and Britain are already curtailing many money-transfer services to Somalia and East Africa. It is important that innocent East Africans living abroad are not denied the opportunity to send money to their families, on which many rely. That means the banking systems of Kenya and the region must formulate a more sophisticated and integrated relationship with the international financial community to ensure that only those who seek to harm us are financially suffocated.
In Kenya, we are aware that monies intended for honorable purposes, such as schools and welfare provision, are sometimes extorted to fund al-Shabaab, which seeks to harm all Kenyans, regardless of their faith. We must ensure Muslims are safe in Kenyan society to freely practice their religion without interference. They must know that donations they make to assist their communities are not diverted for malicious ends.
Al-Shabaab wants Kenya to turn inward and the world to withdraw its investment and support. We must show those who attacked Westgate that they have achieved the opposite, with Kenya and its allies working more closely than ever. Our common goal should be a more prosperous, united Kenya, and al-Shabaab’s defeat.
Mr. Kenyatta is the president of Kenya.
A version of this article appeared October 6, 2013, on page A17 in the U.S. edition of The Wall Street Journal, with the headline: The Path to Defeating the al-Shabaab Terrorists.

Raila Reveals Details on Exactly How He Was Tortured – Flame Of Freedom < Previous
PHOTOS – Fresh From Boeing Workshop in Seattle, Kenya Airways New Plane is Ready Next >
Recommended stories you may like: