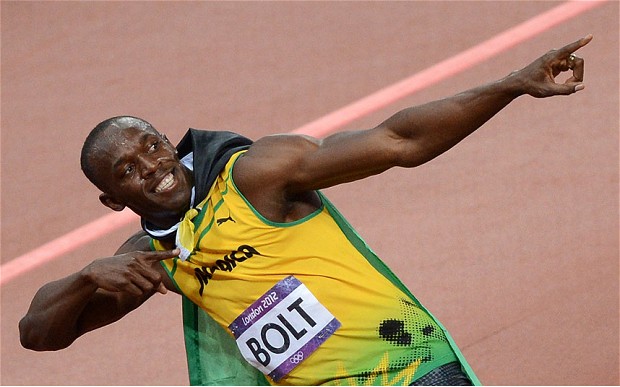 Usain Bolt plans to retire after the 2016 Rio de Janeiro Olympics.
Bolt said Wednesday he wants to win more gold in Rio, set another world record in the 200 metres next year, and perhaps win a gold medal at the Commonwealth Games.
“So far, (it) is after the Olympics in Rio,” Bolt said of his retirement plans. “I think if I am in great shape, I’ll go there and do what I have to do. I think it will be a good time to retire, on top.”
Winning another three golds in Moscow last month made him the most decorated athlete in world championship history with eight gold and two silvers. He has six gold medals from the Olympics.
“If I want to be among the greats of (Muhammad) Ali and Pele and all these guys I have to continue dominating until I retire,” Bolt said ahead of his final race this season in the 100 at Friday’s Van Damme Memorial.
Bolt won the 100, 200 and 4×100 relay at the 2008 Beijing Olympics and at last year’s London Games. He won the same triple at the 2009 worlds before repeating that feat in Moscow last month.
At 27, Bolt has the experience to know that a lax season midway between Olympics can hurt him. In 2010, a soft entry into the year and subsequent injury cost him almost a full season.
“I kind of didn’t do much in the off-season and then got injured and had to start from scratch. So this season, I will not make that mistake again,” Bolt said.
Like 2010, next season has no major championships, but Bolt is forcing himself to think of new goals for 2014.
He already owns the 100 and 200 world records and shares the 4×100 with his Jamaican teammates. He acknowledges the 100 record of 9.58 seconds will be extremely tough to better, but he hopes to improve on the 19.19 he ran in the 200 in Berlin four years ago.
“I have learned, I have mastered the art of running the turn,” Bolt said of the 200. “So if I can stay injury free and be in good shape, then it is possible for me to definitely go after the world record.”
As a Jamaican, Bolt can compete in the Commonwealth Games, too, something he has yet to do. Next year, the event will be held in Glasgow, Scotland.
“I have never been to Commonwealths and so it is always good to add to your collection of gold medals,” Bolt said.

Caroline Mutoko Finally Responds To Sonko After His Melt Down This Morning < Previous
Robert Alai’s Take on Sonko’s Outburst on KISS 100 Next >
Recommended stories you may like: