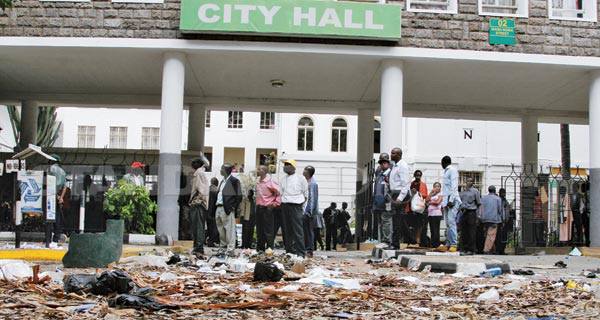 A section of City Council of Nairobi Askaris this week downed their tools following the failure of incumbent Governor of Nairobi Evans Kidero to pay them their dues.
This happened just after the Governor declined to comply with the contents of the CBA requirements.
The workers have expressed their anger by re-disposing heaps of garbage that were previously on the streets and dumping them along the walking paths as well as the streets of Central Business District of Nairobi.
A worker who did not wish to be identified claimed that the management of City Hall has gradually deteriorated since the introduction of County Governments and some serious issues need to be addressed.
A number of City dwellers have also cried foul since the City has evidently become dirty and this is a indication that there some mismanagement of The City Hall
By Cliff Ahawo

Kenyans React To News That Newspapers Will Cost Sh60… Hilarious < Previous
PHOTOS – President Uhuru Visits Matiba At His Home Next >
Recommended stories you may like: