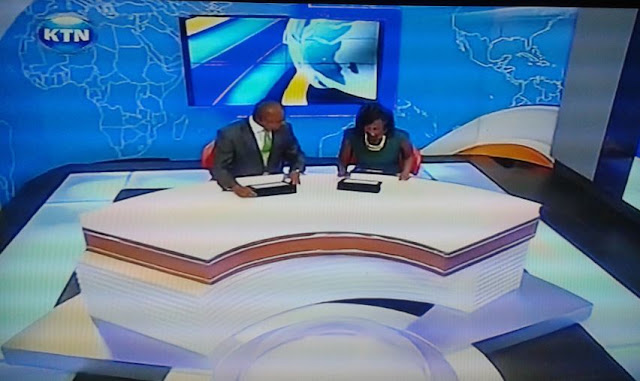 KTN last night re-branded for the umpteenth time. They had done some considerable publicizing, which included some promotional slip on yesterday’s Standard newspaper, and a TV promo. You can therefore imagine Kenyan’s expectation levels.

However, unlike their previous studio re-brands, yesterday’s was not enthusiastically received.

It got very minimal mentions on social media, and if you watched their news you may get why.

Their temporary election studio, which they continued using after the polls, was splendid. It had lots of screens and space to walk around. Only problem was that it was set up on their ‘indoor, open air, multipurpose space’, and therefore had to be moved.

Their new studio is so small, it makes Citizen TV’s already small studio feel like Aljazeera’s. The only consolation was probably the new combination of Wilson Mburu and Yvonne Okwara.

Following this latest developments, the title for the best news studio sadly reverts to Citizen TV, though some may place NTV higher.