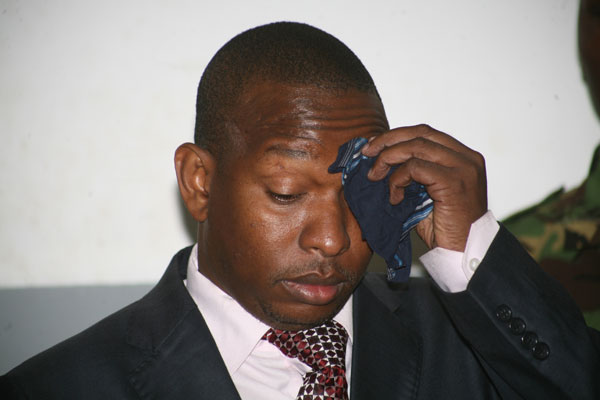 Nairobi Senator Mike Sonko, is in the news again. This time not because of fighting walls, or climbing gates, or sleeping on tarmac… It’s because of the insults he hurled at Caroline Mutoko this morning.

In an on-air call on Kiss 100, Sonko was brought to task by Mutoko, on why he loves giving handouts. The interview started going south, and then we saw, or rather heard the ugly side of Sonko.

He called her a whore with a huge salary. He also talked of Mutoko’s love for her cigarette.
You have to read that story in full.

Kenyans have started the hash tag #SonkoMetlDown to discuss his behaviour this morning. Below are some comments.

Shame on all of you condoning this mad man’s behaviour.the Qs asked were simple.as a politician he shld learn 2take the heat #SonkoMeltDown [email protected]

Who doesn’t know that Sonko helps the needy ? And why would Caroline Mutoko want to know his sustainability on that ? #sonkomeltdown [email protected]

Did he really have to ask “who f**ks you?” #sonkomeltdown – @SaraiNjenga

EVERYTHING WAS ALL FINE AND DANDY AND THEN……#SONKOMELTDOWN ON #KISS100!!!!!! – @thatchickLynda

I don’t need alcohol to listen that #SonkoMeltdown, I need something stronger like jet fuel!!! He’s the bloody senator FFS!  –  ‏@Babu_Carlton

Ok .. How can anyone blame Mutoko .. I mean she’s not a queen cake but it was just a simple question .. #SonkoMeltDown .. [email protected]

#Sonko is the loser in #sonkomeltdown.In the end,it’s not the questions asked, but answers given that matter – @AsedaGovernor

#sonkomeltdown Insults are never in good taste. Whether you feel justified or not. –  ‏@_muriel_a

#sonkomeltdown u got to love Carol she is calm when someone is going of at her Sonko u need Pr asap Damage Control mode! – @kimetojnr

And they voted Sonko “Role Model of the Year” at Mwafaka awards….. – @mmnjug

Waaaaaaaa!!!!! The kind of unprintable words that Mike Sonko has hurled at Caroline Mutoko live on air!!!… Dear God have mercy!! – @offsyid

#sonkomeltdown that was pathetic from a senator!i agree with caro as much as most guys would want to hate on her.sonko doesnt solve anythng. – @JivahJ

Between Carol and Sonko, guess our senator was the one high on Cheap weed. as a public figure, that was uncalled for. – @JosaDeGooner

AUDIO – Mike Sonko Calls Caroline Mutoko a H0RNY WH0RE on Air < Previous
After Receiving Unprintable Insults From Sonko, Chipukeezy Apologizes For Joking With His Daughter Next >
Recommended stories you may like: