Two men from Kisimani area in Kisauni on Sunday agreed to share a woman, and never fight over her. The pair, Mr Sylvester Mwendwa and Mr Elijah Kimani signed the written agreement after allegedly realizing they’ve been having an affair with the same woman for 4 years.

Community policing officer Adhalah Abdulrahman said he came to know of the two during a fight. “I heard people fighting and went to check, but I was surprised to see two men fighting over a woman who is said to be a widow and a mother of twins. I tried solving the issue but they refused, each insisting he could not live without the woman,” said Mr Abdulrahman.

When the woman was asked to make a choice, she declined saying she could not live without either. It is then that the men also refused to leave the woman, opting to be co-husbands.
Part of their deal is that if the wife gives birth they will both raise the child. They will also pay her rent equally.

Here’s a scanned copy of the marriage contract. 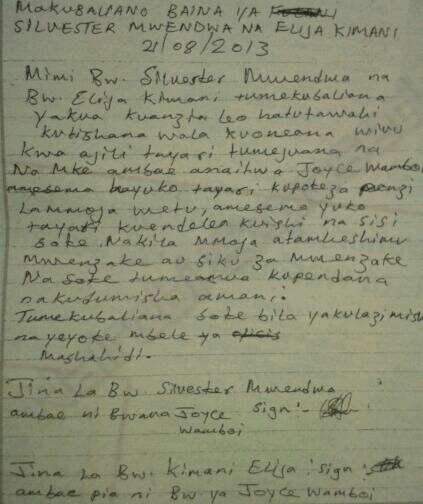 VIDEO – Making of Safaricom’s Naweza Advert (2013)… Behind The Scenes < Previous
BREAKING – Kingwa Kamencu Arrested For Stealing & Burning Neighbours’ Underwears Next >
Recommended stories you may like: