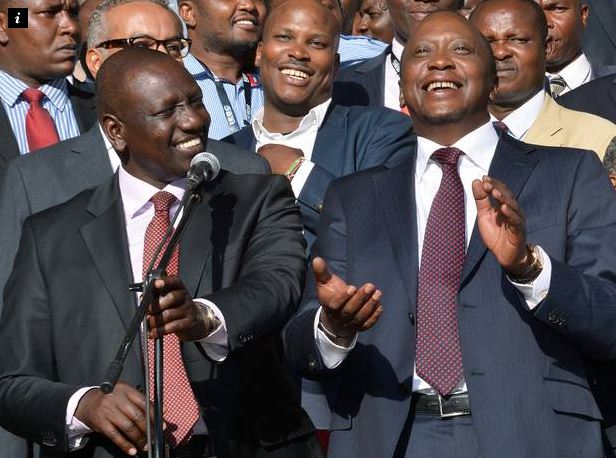 When the new president of Kenya visited London last week for the summit on Somalia, he held a private meeting with our prime minister. This was unsurprising: the two countries have the closest ties, Britain is leading international efforts to restore order in Somalia, and Kenya has thousands of troops trying to bring peace to its shattered neighbour.


But the meeting was brief and the usual diplomatic photographs were not released. For David Cameron did not want to be seen shaking the bloodstained hand of a man accused of mass murder. Uhuru Kenyatta, the spectacularly wealthy son of his nation’s founding figure, is accused with vice-president William Ruto of orchestrating ethnic violence that exploded after the 2007 election, leaving 1,300 people dead and 650,000 displaced.

Cameron probably had to meet the Kenyan president if he wanted the summit to be a success. But the diplomatic dancing highlights the looming problem caused by the pair’s unexpected electoral victory; already, Barack Obama has indicated he will fly over the land of his father on a forthcoming tour of Africa. For all the relief felt over the peaceful poll two months ago, the result presents a horribly painful headache – and could end up crippling the court created as the ultimate sanction against genocide.

This seems incredible, given the hopes vested in this body after a troubled birth just over a decade ago. The International Criminal Court was designed for those monsters accused of the world’s worst crimes. It was supposed to terrify despots, dictators and warlords; last year, it won the first conviction of a former head of state in an international court since the Nuremberg trials of the Nazis. Yet we may be witnessing its early death throes.

The reason is simple: realpolitik. As Richard Dowden, director of the Royal African Society, said last week, no one envisaged a situation in which someone accused of crimes against humanity would be willfully elected president. Yet Kenyatta and Ruto – who both chose to go to The Hague rather than face trial in Kenya, expecting the case to wither away – converted their indictments into electoral dynamite by turning it into a tussle between Africa and the West.
The ICC has indicted 30 individuals from seven countries, yet all of them are African. This has led to accusations of “white man’s justice”, with grumbles about Western bias and how our leaders and their allies can literally get away with murder when it comes to war crimes. This may be unfair, given it is a court of last resort, but it is difficult to challenge the hard evidence. Even the leader of next-door Uganda, who supported the ICC’s creation, now argues it is a foreign tool – although perhaps he is acting out of self-preservation.

These matters are coming to a head in explosive style. Ruto must report to The Hague in 15 days, with Kenyatta packing his bags to follow him in July. Few expect them to turn up, for all the jibes and jokes in Nairobi about running the country by Skype from Holland. If they fail to show, warrants are issued instantly for their arrest, the newly elected rulers become fugitives in 122 countries that endorse the court, and Kenya becomes the world’s least-likely pariah state.

This presents a diplomatic nightmare, especially for Britain, given our historic, commercial and security links. Kenya’s political class may be among the planet’s most venal, but the country is booming; it has just discovered oil and it plays a crucial role in a fragile region of growing strategic importance. A freeze in relations would not stop trade and tourism, but would make them harder.
Diplomats and lawyers are scrabbling to avoid this looming nightmare. Kenya has asked the United Nations to defer the charges; the president’s British barristers are searching for delaying tactics; suggestions are being made to conduct the trial via video. One idea is to move the court temporarily to Kenya, although this would set a costly precedent while increasing the risk of witness intimidation. Who would want to take the stand against their president then?
If these fudges fail and Ruto – reportedly facing a more solid case – does not show up, the international community must make a difficult decision. Does it back a controversial court set up to prosecute people accused of the most horrible crimes possible against leaders elected fairly by their people in full knowledge of the awful accusations against them? Choices, after all, have consequences.

Ultimately our government must stand by the red lines it has drawn; otherwise it undermines the global struggle for human rights. These two men are, after all, accused of direct involvement in appalling atrocities. Yet key competitors in Africa, such as China, India and Turkey, have not signed up to the ICC, so could reap the benefits.

Coincidentally this week Britain sees a visit by another president – Rwanda’s Paul Kagame, seeking to restore trust after aid was briefly stopped following his latest intervention in the Democratic Republic of Congo. His regime regularly murders rivals, has routinely committed war crimes and sparked the most lethal conflict since the Second World War. If ever there was someone who should be in the dock at The Hague it is him; instead he is lionised by Western politicians. Is it any wonder there is such distrust over the ICC – and why its death would be little-mourned in many parts of the world?
Indendent.co.uk
Follow @nairobiwire

David Rudisha Ranked Ahead of Gareth Bale and Van Persie, As One of The World’s Most Marketable Athlete < Previous
Nation Media Group Set To Launch Weekly Tabloid Newspaper Next >
Recommended stories you may like: