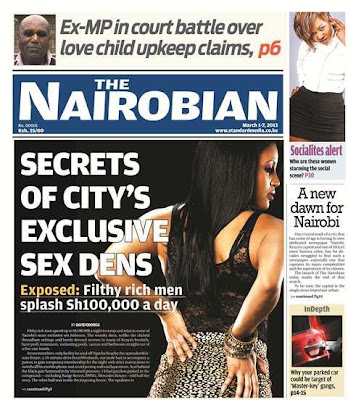 Nation Media Group is set to launch a weekly tabloid newspaper targeting Nairobi market. This is believed to be a response to Standard’s Nairobian paper, launched a few weeks ago.
According to sources, the new paper will be called Nairobi Now, and it should hit the market in a few weeks time.

Reportedly, Standard had poached some upcoming journalists from Nation to join The Nairobian, and now Nation may be keen to bring them back.
The launch of the new tabloid will surely eat into Standard’s market share, but the Mombasa Road based media house seems to have a better taste of gossip than its Kimathi Street counterpart. This can be explained by their Pulse and Zuqka magazines.

A few years back, Nation had launched Daily Metro newspaper, but it had to be cancelled later for lack of profit making.
This will be the second time that Nation has been caught sleeping by Standard. The first was during the launch of Game Yetu, which NMG answered with Sporton.

When Democracy Has Blood on Its Hand – Opinion About Uhuru’s Presidency By Britain’s Independent Newspaper < Previous
Justin Bieber Robbed in South Africa – Movie Style Next >
Recommended stories you may like: