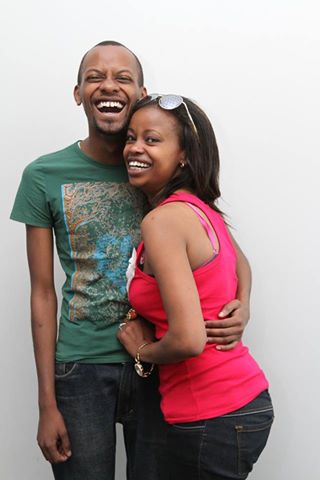 One FM presenters JB and Tina Kagia are engaged and will be getting married this year. They recently opened up to Pulse Magazine, and this is how it went down.

How did you first meet?

JB: It was 2009.I had gone for a job interview at Radio Africa. Then I saw her, through the glass, she was in the booth, and she was on air. I couldn’t move. I was just transfixed on the spot. I was in love.
Tina: I was on air during my show and I saw him right outside the studio. I kind of had a groupie moment and waved at him, since he was already famous, but it just ended there. I never thought I would date him, leave alone love, marry him and carry his babies.

What was your first impression of each other?

JB: I was scared. I know hot chicks always have men hitting on them, but damn, I was in a relationship then, and I was ready to cheat on my girl. Tina was the right woman for me.
Tina: I never saw him as a man I would love. I actually told him, we could never, ever date. I had to bite my words after some time. The first week of our relationship, we went to a VCT and ensured everything is OK.

Tina is older than JB, has that ever been an issue?

JB: Not at all. I love her so much, and I have never even thought about the age issue
Tina: Yes, my friends were like, “How can you be seriously dating a comedian who is younger than you?” But it has never come between us, we are in love, and love conquers everything.

Why does Tina insist that JB duped her to marry him?

JB: Yes, I lied to her to get my way, but to be honest; she is the only girl I have worked so hard to get. She is really good at keeping people at arms length. About lying to her, I told her to change her relationship status on Facebook to indicate that she is engaged to me — it was a publicity stunt, but she had no idea I wasn’t going to allow her to ever change the status to ‘single’.
Tina: I thought it was a publicity stunt to boost the ratings of our show but somewhere I got swept off my feet. I have to swear he is the most persistent man I have ever dated. He kept chasing me and I tried as much as possible to ward him off but eventually, I fell in love.

Now you already have a six-year-old daughter, how many more kids do you want?

JB: I actually had to work so hard to win over Imani (Tina’s daughter). The first time I met her I was so nervous, but she is interesting, highly intelligent and I love her so much. Ask her how many kids we want.
Tina: I progressively started introducing JB to my daughter and one day, she just asked. “Is he your boyfriend? Can I meet him?” and they just clicked. My daughter says if we ever break up, she will pretend to be JB, and write me a letter asking for forgiveness so that we get back together. He will be a good daddy. We want two more kids.

Has your relationship ever been strained?

JB: Yes, a lot. One time, a female friend who didn’t like Tina told me nasty things about her. I hit the roof and didn’t talk to her for two days. She then dumped me and I refused to be dumped. I went back to plead.
Tina: Yes, he was angry over lies, and I tried to reach out and explain the situation to him, but he wouldn’t let me. I also got so upset at him for believing someone who wanted to see our relationship crumble. Eventually, he is the one who came back to do the pleading! I had already dumped him.

Who wears the trousers in this relationship?

JB: I wear the trousers, and also wash them! Anyway, I make what you can call executive decisions. But she makes all other decisions. One thing you don’t know about Tina is that beneath those clothes, she has a beautiful body.
Tina: I Constantly have to rein his spending habits. By the way, one thing you don’t know about JB is that he is very jealous.

You are so much in love, what don’t you two share?

What do you hate about each other?

Tina: I hate that he never likes to eat, he likes seeing food on a plate but will never eat it. He is also a clean freak. He is obsessed about shaving his hair. I also hate that he never picks his phone.
JB: I don’t hate it but I think she is too generous, she has a big heart, she is always helping someone somewhere, and she likes cats. She would have ten cats if I could let her, but there is no way I am going to have cats all over my house.