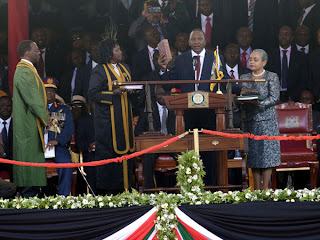 As Kibaki attended his last public event as president (though half way), another common figure in the circles of power was also looking tired and in need of a rest. Presidential MC Sammy Lui.

The veteran MC unknown to many Kenyans holds the title Senior Deputy Secretary, State Functions. He accompanies the president to all public events and automatically takes over the program.
He has served in successive governments, and is actually a pioneer broadcaster at KBC English Service.
Another fact few Kenyans are aware of, is that he is father to former Kenyan Big Brother housemate Nick Wang’ondu.

Now, on Tuesday during Uhuru’s swearing-in, Sammy Lui was clearly stretched to the limit. His voice became hoarse midway and clearly there was no replacement or plan b. He continued and continued and continued. Some people think it’s time he takes a break.
Below is a collection of comments from Twitter.

Sauti ya Sammy Lui imeenda retire pia! It will be missed.” Si a clear throat jameni…

Sammy Lui is a control freak. Hata with a hoarse voice bado ana insist!!!! Let your friend help you!!!!!!!”

Somebody give Sammy Lui a cold Stoney…and a retirement package!

Can someone please stand in for Sammy Lui. His voice is gone…!

To create jobs no disrespect but people like Sammy Lui the MC should retire.

Sammy Lui,How much does it cost to clear your throat?

Sammy lui can you cough…

Three triplets! And here i thot they were four triplets bwana Sammy Lui!

But seriously Sammy Lui needs to retire and be a Brand ambassador for vicks kingo or strepsils.