Kenya is Stuck With Uhuru Kenyatta, For Better or Worse – Guardian Newspaper 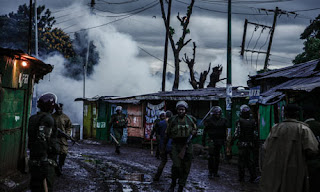 After five years of torturous build-up, one day of voting, nearly a full, unexpected week of counting and another two weeks of court battles, Kenya finally knows for sure who its next president will be. Uhuru Kenyatta, take a bow, and the key to your new office in State House.
The supreme court’s verdict, when it came, was not unexpected. Defeated presidential candidate Raila Odinga, the perennial runner-up, had insisted from the moment it became clear that he was on the losing side yet again that the election was flawed, citing counting errors, technological faults and mysterious unmarked registers. But if there was a case to be made, his legal team bungled it with late submissions and dodgy affidavits which saw some of the most compelling evidence thrown out of court.
The election was free and fair, the court ruled, upholding Kenyatta’s victory in the process. As the judgment was read out, Kenyans turned their attention to Odinga, whose reaction could yet precipitate the kind of violence seen after the disputed 2007 polls. Odinga, however, rose to the occasion.
“Ladies and gentlemen, the court has now spoken,” he said in a statement. “Although we may not agree with some of its findings, and despite all the anomalies we have pointed out, our belief in constitutionalism remains supreme. Casting doubt on the judgment of the court could lead to higher political and economic uncertainty, and make it more difficult for our country to move forward.” In short, Odinga accepted the verdict, removing the last possible barrier between Kenyatta and the presidency. His supporters, for the most part, followed suit.

Where was the violence?

Before the polls, many foreign journalists had predicted – or at least raised the prospect of – a surge in violence during or after the Kenyan vote. On polling day, Kenyans on social media delighted in poking fun at the scare stories, many pointing out that Kenya was a different place now and that plenty of measures had been put in place to prevent a re-occurrence of the troubles in 2007-2008. And the Kenyans, sure enough, were right; by those standards, these elections were indeed peaceful and trouble free.
Of course, this is relative. At least 15 people died on the eve of elections. Another five were shot this weekend after the supreme court judgment, during angry protests in Kisumu and a Nairobi slum. These elections may have been more peaceful than last time, but they weren’t peaceful.
Nor did the lack of physical violence mean that Kenyans had put their differences behind them: “It is not true that this election has been peaceful,” wrote Kap Kirwok in Nairobi’s The Star. “Peace, as you would agree, is not just the absence of war or violence. It is freedom from disturbance; a sense of quiet and tranquility. The ferocious tribal clashes waged in the digital forum called social media puts paid to the notion of having had a peaceful election. In that arena, it is war minus the shooting.These cyberspace duels make two things very clear: the distance between digital slash and burn and actual physical combat is not as far as you might think; and, hatreds run deeper than we are willing to admit.”
Kirwok is grossly overstating the point – social media insults can hardly be compared with physical injuries and deaths – but what he’s trying to say is that the problems which underpinned the 2007-08 have never been resolved, and as long as this is true then Kenya will always be far closer to the abyss than is comfortable. As I argued in a previous article, the reason that analysts and journalists were so concerned about the elections was because of the apparent institutionalisation of violence in the political sphere. This did not manifest itself this time round in widespread electoral violence, but it certainly was not absent: don’t forget that Kenyans, of their own free will, chose two men accused of crimes against humanity to fill their top two political positions.

The ICC won’t go away

Some argue, in fact, that the International Criminal Court charges of crimes against humanity hanging over president-elect Kenyatta and deputy president-elect William Ruto actually helped rather than hindered their campaign. Kenyatta and Ruto were able to play the martyr card quite successfully, arguing victimisation by a neo-imperialist west trying to meddle in African affairs once again. It’s an argument familiar to anyone who has ever listened to a Robert Mugabe speech, and it’s been taken up by a surprising number of well-regarded Kenyan writers such as Binyavanga Wainaina who positioned Kenyatta’s victory as some sort of triumph against the crusading “missionary” of the International Criminal Court.
But the interesting question now is what influence the ICC charges will have on the Kenyan government. Certainly, Kenyatta and Ruto will have to direct significant amounts of time and resources to fighting the charges; time and resources better directed towards governing the country, which is what they have been elected to do.
There are also potential foreign policy implications. “Western nations have a policy of only ‘essential contacts’ with court indictees,” said James Macharia and Edmund Blair for Reuters. “They say that will not affect dealings with the government as a whole, but will worry the issue could drive a long-time ally closer to emerging powers such as China.” This seems inevitable; Kenyatta’s team has already expressed its displeasure with Britain’s “shadowy involvement” in the campaign, and China just last week reiterated its undeniably attractive no-strings-attached foreign policy. So for better or worse, the ICC will continue to shape Kenyan politics throughout Kenyatta’s first term – even if the charges go nowhere in the end.

To the business of governing

And so to the hard part, where Kenyatta and Ruto have to actually govern their country and make good on all those campaign promises. Initial signs aren’t good, with a bunch of new MPs agitating for higher pay and threatening to bulldoze the salaries and remuneration commission, which recently concluded that Sh535,500 was an acceptable monthly wage for parliamentarians in a country where annual GDP per head is three times less than that. This will be an early test of Kenyatta’s mettle as a leader, and his ability to stand up for people rather than politicians. Another will be whether he makes good on his pledge to use the money saved by avoiding a run-off election to set up a youth empowerment fund.
Not that Kenyans will be overly concerned. If the last five years of ineffectual unity government has shown us anything, it’s that Kenyans can look after themselves. Which is lucky, because chances are they’ll have to keep doing so.

Shaffie Weru To Represent Kenya At Big Brother Africa – Official Announcement Soon < Previous
Uhuru Kenyatta The 3rd Most Followed African President on Twitter – Report Next >
Recommended stories you may like: