After Being Branded Illuminati, Uhuru Kenyatta Clarifies Why His Wife Will Hold The Bible At His Swearing-In 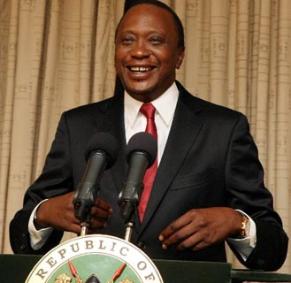 When it was announced that Uhuru Kenyatta’s wife Margaret would be holding the Bible during the president’s swearing-in, Kenyans, always the ready to speculate, were at it again. There were rumours and suggestions on social media that Uhuru Kenyatta had refused to hold the Bible because he was a Freemason. Others claimed he was Illuminati.. Huh.

@Zakcure tweeted, “I’m the only one thinking of Margaret holdin the bible during swearing in of Uhuru is kind of illuminati?”, while Jackson Luvusi also suggested, ” Uhuru’s wife to hold the bible during his swearing in. Sema #Illuminati”
And the comments were endless.

Uhuru doesn’t wanna touch the Holy Bible. Someone scream ILLUMINATI!!!!!! – Frank Allano
Michelle holds the bible for Obama, Margaret holds the bible for Uhuru, sema illuminati. – Sly Mwaura
Uhuru is doing exactly what obama did, not holding the Bible up during his swearing in. But we all know obama is illuminati so. . . – Francis Ngwata
Illuminati is real “@iWateba: Why can’t Uhuru hold his own bible tho?” – Samie

Perhaps reading those comments drove the president-elect into issuing a statement explaining what he meant by Margaret holding the Bible.
On his Facebook page, Uhuru clarified that his wife will not hold the Bible for him, but with him. He said that it is a practice in most countries of the world, and was part of his greater plan to uphold family values.
This was his statement.

I have asked my friend and wife Margret to hold the Bible together with me as I take the Oath of office on Tuesday; a tradition exercised in most countries of the world. I promised to uphold family values and by having her stand alongside me, we will not only be vowing individually as recognized by the Constitution but also collectively as recognized by our marriage vows also enshrined in the law. By holding the Bible, not for me but with me, as I take my Oath of Office, she will be committing herself to ensure she reminds me of my promise to the Kenyan people and also assuring Kenyans that family obligations will not interfere with my execution of duties as President.

Next time someone tells you Uhuru is Illuminati, tell him he is a practicing catholic. You can quote Nairobi Wire’s ‘50 Little Known Facts About Uhuru Kenyatta‘.

Pictures of Evans Kidero’s Car.. The One Everyone is Talking About. < Previous
Raila Odinga Flees To Uganda Next >
Recommended stories you may like: