Venezuelan Prophet, Mugumo Tree, And Other ‘President Kenyatta’ Prophecies That Came To Pass 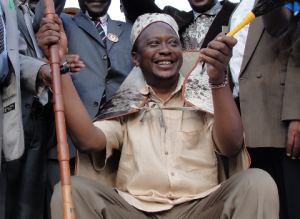 Like others before it, this election was not devoid of prophecies, most of which talked about the presidential race.

In December last year, Prophet Dionny Baez of Venezuela told his congregation in Nairobi that Kenya’s next president would come from Mount Kenya. That was loosely translated to mean that Uhuru Kenyatta would be Kenya’s next president by many, but a few skeptical ones argued that he could have meant Martha Karua or even Peter Kenneth.
Some of his other prophecies were:

1. Kenya will experience 17 years of acceleration after which it will be second to SA as an investment destination in Africa (vision 2030 comes to mind)

2.There will be an explosion in the telecommunication & tourism sector

3. Beginning April 2013, additional massive deposits of oil and gas will be discovered

4.We will have a born again president soon (not clear if it is the next)

5. The ICC cases will make the West to attack our sovereignty BIG time

6. MRC will rear its ugly head

7. There will be drastic changes in weather patterns precipitating drought

8. There will be election violence (pre & post) but of a lesser scale than 2007-2008’s yet this time the weapons used will be hand guns as opposed to machetes, stones like the previous one

9. An Asian oil company with a heavy presence in Nigeria will sign a mining contract with Kenya in 2013

10. Kenya will receive massive funding from European Development Fund to the tune of billions of dollars

11. EAC trade barriers will be removed; free trade within EA

12. China will do even more wonders especially infrastructure over the next 5 years

His first and most important prophecy has passed, will his other 12 prophecies pass too?
That article was read over 100,000 times on Nairobi Wire, and shared on social media over 5000 times. When provisional results showed Kenyatta ahead, the article shot to number 1 most popular article this week, a whole 2 months after it was written.

One month after the Venezuelan had spoken, a 200 year old mystic mugumo tree fell somewhere in Giakanja village, Nyeri county. Kikuyu elders interpreted this phenomenon called ‘Ituika’, as a transition from an old leader (Kibaki) to a younger leader (Kenyatta ??).
Most people accused those who believed the claims as plain stupid. To quote their exact words, “Africans are the easiest people to deceive.”
Whether the falling of the Mugumo tree had any correlation with Kenyatta’s win will forever be contentious.

Towards the end of last month, another prophet, Thomas Manton, wrote that God had showed him that Kenyatta would win. In a lengthy blog post published on his website, Manton also said that the ICC cases will soon disappear.

His other prophecies were:

Before the elections, there were at least 2 other prophecies talking of an Uhuru Kenyatta presidency. At the end of the day, the choice of whether to believe or not to believe in prophecies is a purely personal one.

How The World Media Reported Kenyatta’s Win < Previous
Kenyans Crazy Questions To Prophet Mutahi Ngunyi.. After His Accurate Tyranny of Numbers Next >
Recommended stories you may like: