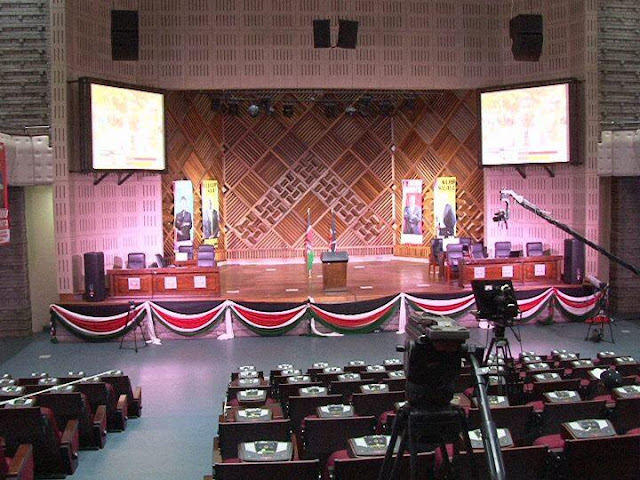 Jubilee Coalition is getting ready for a lavish ceremony, where Uhuru Kenyatta is set to give his acceptance speech. The venue is Catholic University of Eastern Africa, CUEA in the outskirts of Nairobi.
The institution’s auditorium has been prepared for the Jubilee team, with party colours and ‘Team Digital’ banners. The podium has the Kenyan flag as its background.

Outside the auditorium, tents have been erected for guests who will not make it inside. Elaborate security and media arrangements have been ensured.
The ceremony will however have to wait for the official announcement by IEBC of Uhuru’s win, which looks more possible as time passes. In the meantime, those at the venue are following proceedings from large television screens.
Should Uhuru win, it is not clear whether he will give his acceptance speech on Friday night or on Saturday.
Initial arrangements were that he arrives at the venue on Friday night, but IEBC has once again delayed the official announcement.

Breaking: Maina Kageni Shopping For A Chopper < Previous
President Uhuru Muigai Kenyatta It Is Next >
Recommended stories you may like: