Jendayi Frazer: America Is Playing A Dangerous Game By Ignoring Uhuru Kenyatta. The Chinese Will Take Over 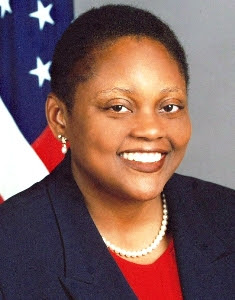 Former US Assistant Secretary of State for African Affairs, Jendayi Frazer has stated that US is taking the wrong direction and risks being alienated, if they continue their cold war against Uhuru Kenyatta.
In a Television interview on American channel PBS, Frazer said that her country was wrong to issue threats of ‘consequences’ in the first place, as that amounted to interfering with the domestic affairs of another country. She said that Kenyatta unlike Bashir, had promised to cooperate with the court, and that his case was actually collapsing following the withdrawal of key witnesses.

Frazer added that America needs Kenya in the war against terror, considering its strategic location, and the threat Somalia brings along. She further added that Kenya was an economic hub in the region with many American companies such as FORD and General Electric setting base here.
She then explained how China is dethroning America in Kenya, by bagging contracts to build roads and ports.
Her parting shot was, ““The geo-strategic environment has changed entirely and particulary (in favour of) China. The Chinese have changed the playing field (and) if the US, the UK and Europeans don’t want to deal with Uhuru Kenyatta, he has another option,”