The Next Presidential Debate Should Have Only Raila And Uhuru 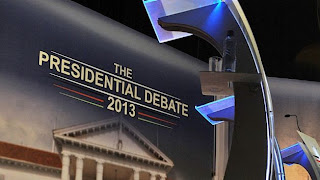 By Donald B Kipkorir
Next week on February 25, is the second and last presidential debate. The one of February 11 had eight presidential candidates attempting to speak to us. With Julie Gichuru and Linus Kaikai as moderators, it meant that 10 speakers had to share 120 minutes.
No one can articulate a life-changing position in less than 12 minutes. It is for this that I propose that the next debate be between Raila Amolo Odinga of CORD and Uhuru Muigai Kenyatta of Jubilee.
In every presidential election worldwide, all manner of candidates throw their hats into the ring, but more often than not, two are always competitive with realistic chance of winning. With passage of time, liberal democracies end up having two ideological camps; left and right leaning with many shades of grey to the centre or extreme.
Each group develops an established political party or leader. By happenstance, Kenya’s left is led by Raila and right by Uhuru. We must give them a chance to crystallise their ideologies. Developing two strong ideological positions will in the long run, allow Kenya to free itself from being a captive of dark forces of tribalism and vote buying.
In having Raila and Uhuru only in the next debate, we will hear and interrogate them more closely on their programmes, policies, and strategy for Kenya. In the 2012 US pesidential elections, 32 candidates were on the ballot.
Yet, the American media through the privately-run Commission on Presidential Debate, had Mitt Romney of the Republican Party and Barack Obama of the Democratic Party only for the presidential debates. France had ten presidential candidates, and its media also gave forum to Francois Hollande of PS and Nicolas Sarkozy of UMP only. It is only logical to have two candidates debating.
Kenya’s two presidential debates are organised by Media Debates Limited, a private company jointly owned by Nation Media Group, Royal Media Services, and Standard Group, all private companies. The Constitution jealously protects private business. More so, the independence of the media is one of the basic rights in our Constitution.
These rights enable media houses to decide whom to invite to appear in their studios or broadcast. No one, not even the courts can force a privately funded media company to invite guests to its shows. I have not read the judgment of Justice Odunga that directed the Presidential Debate invites Paul Muite and Mohamed Dida. But Justice Odunga who is one of few Scholar-Judges will not have made a ruling that violates the Constitution.
Opinion polling on presidential elections has now become established in Kenya. Ipsos Synovate and Infotrak Harris have cut niche for themselves as the two top polling firms. Being Kenyan, more often, we distrust their results through tribal prisms when their results don’t meet our expectations.
The two companies have however been consistent on one thing; that Raila and Uhuru are the top two presidential candidates and between them, they will get over 85 per cent of the votes when cast. The other six candidates will share amongst themselves the remaining 15 per cent.
Opinion polls by reputable companies may not be accurate, but they have rarely made a mistake on the top two candidates. In line with the consistent polling, our next President is either Raila or Uhuru. Respectfully, we must leave out the remaining six in the next debate.
Many say that our negative tribalism has been fuelled by historical disputes between the protagonist political tribes of Kikuyu and Luo. Other tribes have been offering shifting supporting roles to either camp. This will be the first election when the princelings of these two tribes have a go at each other head-to-head. Both Raila and Uhuru are sons of privilege and are not and cannot be like the rest of us. Maybe, it is opportune time, to allow them to sling it out one-to-one in the second debate and in the ballot.
In October 1974, Muhammad Ali and George Foreman held a boxing fight in then Zaire that is regarded as one of the greatest fights in History. Kenya needs a Raila-Uhuru rumble in the jungle on March 4. Jomo Kenyatta and Jaramogi Odinga may watch from the heavens, as the ghosts of 1969 are laid to rest in a democratic process. Kenya may emerge the wiser and mature democracy after this.
Media have a big role to play in shaping our democracy. Democracy doesn’t grow on trees. It is nurtured by many players, the key of which is the media. For long, we allowed the politicians to set the agenda, and we know that for the last 50 years, it has been a treacherous one.
We whine that South Korea, Singapore and Thailand who were our twins left us. Those countries have developed national ideologies that put nation-state first. We don’t. In the media fashioning our national ideology around CORD and Jubilee led by Raila and Uhuru respectively, at long last, we may find a way out of our stunted growth and catch up with our Asian twins.
We look forward to February 25 to listen to Raila and Uhuru only. Let the others find another forum of their own. You cannot give all eight same forum as if all are equal. That is perpetuating a costly falsehood. They say many are called, but few are chosen. Eight have been allowed by the Independent Electoral and Boundaries Commission to run, but private media has a right to and must choose the two. Let the great debate of the two Princes begin.
The writer is an Advocate of the High Court.
Standard Media

Goldie Harvey Wedding Pictures < Previous
Henry Kosgey In Shock After His Son Endorses His Senate Rival Next >
Recommended stories you may like: