PowerPoint Presentation That Made Mutahi Ngunyi Get Killed on Facebook 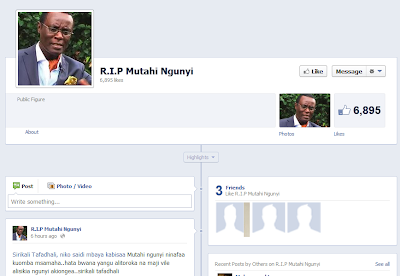 On Tuesday, political analyst Mutahi Ngunyi appeared on Citizen TV, where he sensationally stated that Jubilee is going to win by a landslide.
In a report titled Tyranny of Numbers, Mutahi explained how GEMA and Kalenjin communities alone could win an election and why he believes they will win. Referring to IEBC voter registration numbers, Mutahi said that Jubilee strongholds recorded impressive voter registration numbers compared to other regions and that essentially means the election was won on December 18th, when the electoral body released the registration figures.

He claimed that as we head to the elections, Jubilee has 6 million votes in the bag, compared to CORD’s 2 million.
As if the Citizen TV interview was not enough, Mutahi went ahead and posted a 13 minute PowerPoint presentation on YouTube (Embedded below). Here, he shows graphically why it will be impossible for Uhuru Kenyatta to lose, and on the same note, why Raila will be going home.
He sums it all by saying that for CORD to win, every Luo and Kamba must vote twice; in the morning and in the evening.

This particular analysis by Mutahi Ngunyi did not go down well with most people, majority of whom accuse him of being too ethnic, and using a non-scientific method to make his projections.
Already, several Facebook pages have been created specifically to call the political analyst names. They are gaining fans fast and in their thousands. R.I.P Mutahi Ngunyi was created on Tuesday and already has close to 7000 likes. Another one with a similar name has 2000 likes.

Here is the PowerPoint presentation that angered Kenyans.

Muthoni Drummer Queen To Perform At AFCON Finals < Previous
A Former IDP’s Peace Message To Kenyans Next >
Recommended stories you may like: