Ipsos Poll: Kidero And Sonko Will Both Have Landslide Wins 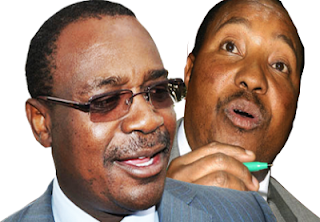 Ipsos Synovate has just released an opinion poll on the state of Nairobi politics. From the poll, candidates leading in the various positions are almost assured of victory in the March 4th elections.

Mike Sonko should now be certain of being the city’s first senator, as his lead is now surely unassailable. 62% of those polled said they will vote for him, compared to 30% who support ODM’s Margaret Wanjiru. 1% said they don’t know while 7% remain undecided.

In the gubernatorial race, ODM’s Evans Kidero is still leading, this time with a margin that will almost certainly make him Nairobi’s first governor. 48% of those polled support him, as opposed to only 34% who support his closest rival Ferdinand Waititu. APK’s candidate Jimnah Mbaru comes a distant third with 8% support. Only 6% of those polled are undecided meaning it will be very difficult for Kidero to lose this one.

An opinion poll released last week by the same pollster showed Kidero leading with 40% followed by Waititu with 37%.
This will come as good news to Kidero, who has managed to widen his lead to probably an unassailable one, in just one week. Waititu will on the other hand have to get back to the drawing board, to try and convince Nairobi to vote for him, in just 10 days.

On the women representative seat, TNA’s Rachael Shebesh is still enjoying a big lead, with 38% of those polled supporting her. KNC’s Esther Passaris comes in second at 21%.
Shebesh cannot however rest easy as the number of undecided voters can easily change outcome. A whooping 25% of those polled claimed to be undecided.
The poll was commissioned by Citizen TV and was carried out between Feb 16th and 18th.

Below are the broken down figures.

50 Things You Did Not Know About Uhuru Kenyatta < Previous
Ipsos Poll: Uhuru Now In The Lead as Dida Overtakes Kiyiapi Next >
Recommended stories you may like: