THE former fattest man in the world has shed a whopping 285 Kg after lifesaving surgery. 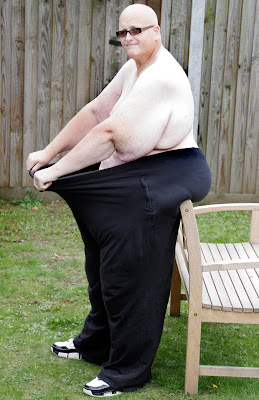 Paul Mason weighed 440 Kg before he had an NHS operation in 2010 to reduce the size of his stomach.
But he now wants to go under the knife again, so doctors can remove his saggy excess skin.
His first operation stopped Paul’s humungous food cravings and led to him losing nearly two thirds of his giant bulk.
The 51-year-old has now slimmed down to 158 Kg, having lost 31 Kg in the past year.
Paul of Ipswich, Suffolk, who once gorged himself on 20,000 calories a-day achieved his massive weight loss with a healthy eating regime.
The former postman is desperate to lose even more but says it is impossible to do so without the help of a further operation to remove up to 50 Kg of excess skin from his body.
The NHS has told him he cannot have the surgery until his weight is at “a stable level” for at least two years.
Paul said: “It’s OK them saying that, but that only applies to people who don’t have much weight to lose.
“It needs doing now and probably in another four or five years. It doesn’t matter how much toning up you do, it’s only going to get worse.”

He said the excess skin was hampering his efforts to walk, which would help him lose even more weight.
Paul added: “My skin splits. The skin behind my knee tears because of the weight of the excess skin.”
He is now writing a book about his experience and looking into the prospect of consultancy work, talking to people about eating disorders.
Paul who was once so fat that he could not get out of his reinforced bed has now started his own jewellery business.
He said he wanted to work towards a life where he can learn to drive, go on holiday and settle down with a partner.
He added: “When you get your life back under control it’s rewarding, you can do what you want and look at things in a new angle.”
Paul ballooned to his incredible size by eating ten times the amount needed by a normal man due to a compulsive eating disorder.
He claimed his binge eating was spurred by heartbreak in his twenties at the time of his father’s death and a deterioration in his mother’s health.

Paul quit his job as a postman when his weight prevented him from completing his deliveries.
As his weight soared he was left unable to stand or walk before finally becoming bed-ridden and being looked after full time by council carers.
Firefighters had to demolish the front wall of his former home so they could drive a fork lift truck inside to lift him out and put him into an ambulance when he needed a hernia operation in 2002.
He was later given a purpose-built housing association home with extra wide doorways so he could move around.
His care bill cost taxpayers an estimated £100,000 a year and is believed to have topped £1million.
At the height of his food addiction, he was gorging an entire packet of bacon, four sausages and four eggs complete with bread and hash browns for breakfast.
He would then eat quadruple portions of fish and chips along with two kebabs for lunch followed by a roast dinner, curries or pizza and more chips in the evening.
Paul would also scoff up to 40 packets of crisps, sausage rolls and pasties as snacks during the day.
His weight loss has meant he is able to out and about again in his motorised wheelchair and can walk short distances.
Uproar As Citizen TV Bans ‘You Guy’ From Its TV < Previous
Graffiti Activist Boniface Mwangi Named Global Post Person of The Year Next >
Recommended stories you may like: