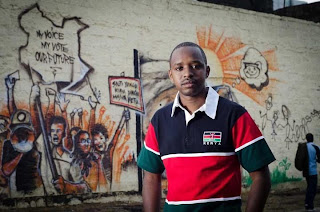 Controversial activist Boniface Mwangi has been named among the GlobalPost’s “Person of the year” list that includes Wikileaks founder, Julian Assange and YouTube sensation, Psy.
According the the site Boniface made the list because of his recent recognition by the annual Prince Claus Prize and was featured heavily in a TIME cover story about “Africa Rising.”
He has been very vocal about the “bad leadership” in Kenya on his social media networks and is the force behind the various graffiti artworks that highlighted them as vultures.


Others who make the list include Joyce Banda the Malawi president who took over from Bingu wa Mutharika, Amaia Egana, a Spanish woman who jumped to her death as bailiffs came to evict her from her home — a symbol of the human suffering of the economic crisis in Spain and Chen Guangcheng, the blind legal activist from China successfully made a daring escape from under house arrest, seeking refuge at the US Embassy in Beijing and causing a diplomatic furor between the United States and China.
the Star

World’s Fattest Man Loses 285 Kg But Now Requires Operation To Get Rid Of Sagging Skin < Previous
Uhuru Kenyatta Is Kenya’s Next President: Venezuelan Prophet Proclaims Next >
Recommended stories you may like: