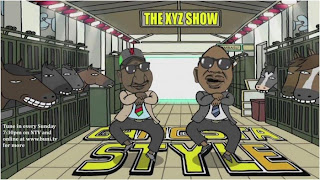 The best political satire show in Kenya XYZ is back for another season, its seventh. It is airing every Sunday on NTV starting from 7:30 PM.
Despite his departure from the Kenyan media scene, Jeff Koinange returns to the show as Keff Joinange and so does Robert Nagila as Nobert Nagirrrrrrr.
On its first episode, the show main cast of Uhuru Kenyatta, Willam Ruto, Musalia Mudavadi and retired president Moi gave an awesome performance of Gangsta Style, a parody of Psy’s Gangnam Style. Here is the video.

KCPE 2012: Top 100 Candidates Nationally (Female) < Previous
Was Waititu Offered Sh 500 Million To Step Down For Jimnah Mbaru? Next >
Recommended stories you may like: