Was Waititu Offered Sh 500 Million To Step Down For Jimnah Mbaru? 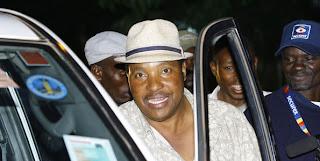 Reports by a local paper indicate that Ferdinand Waititu may have been offered an amount equivalent to Sh 500 million, to step down for Jimnah Mbaru in the just concluded party nominations.

The Star newspaper in its Corridors of Power section, hints at this possibility, but fail to give any name. The man they claim was offered that amount, had apparently agreed to be ‘bought’ out, but changed his mind at the last minute. He claimed he could only step down for an amount of Sh 1 billion, which was not forthcoming.

This is what the paper wrote.

The Nairobi gubernatorial race makes new twists and turns everyday. The latest is what our moles tell us was an attempt to buy off one of the aspirants. It seems the man rejected an offer of a cool Sh500m in order to step down in favor of another. It seems the aspirant changed his mind at the last minute and insisted that they raise the ante— from Sh500m to a whoppingSh1 billion! The ‘negotiations’ collapsed when the aspirant was told the Sh500 million was all there was.

Despite the lack of names, it is clear that the gossip is referring to Ferdinand Waititu and probably Jimnah Mbaru. The two were competing for a ticket capable of eventually winning the governor seat, hence the high price tag. The other strong ticket is ODM’s but the fact that Wanjiru was already disqualified from contesting by her party eliminates her.
In any case, the bishop is nowhere as rich as Jimnah Mbaru.
© nairobiwire.com