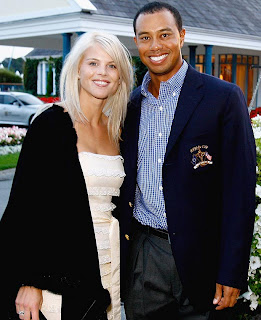 GOLF ace Tiger Woods is reportedly trying to convince ex Elin Nordegren to marry him again — with a mega-bucks pre-nup and an anti-cheating clause.

The shamed sportsman, who was exposed for his serial cheating behind Elin’s back in 2009, is desperate to win her back, a magazine has claimed.
He has offered a $200million pre-nup to the stunning Swede, the National Enquirer reports.
And she is said to be considering the proposal — but only if he includes a $350million anti-cheating clause.
Elin, 33 — who had children Samantha, five, and three-year-old Charlie with the ace — won a $110million settlement when she divorced love rat Woods.

Now she is said to feel the new deal, worth more than half of Woods’ $600million, would be enough to keep him from cheating again.
A source told the magazine: “Tiger didn’t even balk at the demand. Even though his accountants think he’s crazy, he’s ready to sign the pre-nup and set a wedding date.
“The guy has never recovered from being dumped by Elin. He’s dated a lot of models and bimbos but none of them were more than a one-night stand.”
The couple were divorced in 2010 after it was revealed Woods cheated on Elin with a string of beauties — including New York socialist Rachel Uchitel.
Elin is currently rebuilding a $12million estate in North Palm Beach in Florida to create her dream home.
She has dated several men, including a wealthy financier.
But the Enquirer claims Woods got down on one knee to pop the question at Christmas and even presented Elin with a ring.
It also reported the couple are being intimate again, with a source claiming: “Tiger stopped by Elin’s rental house one afternoon when their kids were out with a nanny and they had sex for the first time since the split.
“It took them both by surprise but they’ve continued to find alone time when they’re both at their homes in Florida.”
The Sun
Jimnah Mbaru VS Ordinary Kenyan – CV Comparison < Previous
Toyota Selling This Bomb Proof Luxury Car For Only Sh 14 Million Next >
Recommended stories you may like: