This TV Set At Sarit Centre Is Being Sold For Sh 1.8 Million 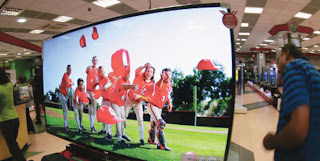 It is stylish and gigantic, capable of covering an entire side of most living rooms in Kenyan homes. But with a price tag of Sh1.8 million, the newest television set in Kenya does not come cheap.

Home appliances dealer LG touched off a heated online debate on Tuesday when it advertised what it billed as the world’s first 84-inch ultra-high definition TV set, putting the price tag at Sh1,799,999.
In a country where the majority would struggle to buy a car or build a home worth that amount, the price did not make sense to most Kenyans.

Wrote on Twitter
Journalist Stanley Wabomba wrote on Twitter: “If you have Sh1.8 million, kindly be informed that LG Electronics is selling an 84-inch ultra HD TV for that amount (Daily Nation, page 23).”
“There’s a TV on DN (Daily Nation) page 23 retailing at Sh1.8 million. Does it have a video link from heaven?” Liz Muthoni joked.
However, even without advertising, the firm has already sold three sets locally in less than one month, Rahul Kochhar, the director of sales and marketing at LG said on Tuesday.
“They have been bought by individuals for home use, not for companies or even pubs,” said Mr Kochhar.
He described the three as high profile Kenyans with an appetite for good life. “This is bringing your whole life together; it is not just TV viewing,” he added.
The TV is currently available only at their two outlets — Sarit Centre and Westgate Mall — in Nairobi.
The company is planning a public launch and thereafter, will step up the advertisement campaign in a bid to convince more Kenyans to buy the classy set.
To those who can afford it, though, the experience is more than just having a TV at home. The set has in-built WI-FI Internet connection enabling the user to stream videos from You Tube and browse other websites.
Just like the new smart phones, a user can install applications like Facebook, Twitter and Skype on the set. At the LG showroom at the Sarit Centre, the Nation was able to log on to Facebook and read the website.
To key in the password or type the link, one will use a magic remote control that points at numbers and characters on a computer-like keyboard, which is normally displayed on the screen.
There is also a smart share feature that enables the user to browse any other gadget that is connected to the same network as the TV.
“Let’s say you have a movie or pictures in your laptop which your friend is using. You can see them on the TV screen while your friend continues to use the laptop,” said product manager Keval Shah.
In addition, the TV has both 3D and 2D viewing options and it enables viewers to convert 2D content into 3D.
“If you have a movie or a programme that is shot in 2D, then you can watch it in 3D on this TV set,” explained Mr Shah. A buyer gets four 3D glasses as part of the package.
The TV is ultra-high definition, which is a higher version of the high definition technology common in the market. It is also full LED which gives the viewer better picture quality with crystal-clear images, deeper blacks and the most realistic colours.
As if that is not enough, the set has dual play that allows people playing TV games to use the same TV, while showing different perspectives to each.
This allows the gamers to see different views on the same panel, enabling them to do away with split-screen gaming.
It uses a technology, where each gamer gets a different set of “all-right” or “all-left” passive glasses.
A compatible Xbox title is needed for the puzzle to be completed, enabling users to see their own game image while their rival sees theirs as well.
Amid talk of African renaissance, Kenya appears to have won the confidence of major multinational companies who are now selling high end products locally. Previously, such products were a preserve of Western countries due to the prohibitive cost.
Last year, Sharp and Sony sent tongues wagging when they launched television sets valued at Sh1 million, targeting the high-end market.

English Names And Their Meanings In Different Kenyan Tribes.. (Hilarious) < Previous
Raila and Kalonzo Taking Belongings To Statehouse, Crazy Picture Next >
Recommended stories you may like: