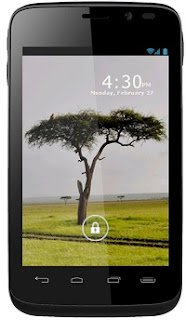 The first smartphone to be launched in Africa and powered by an Intel chip has been unveiled as the Yolo, a new device with a 3.5-inch display, 5-megapixel camera and HSPA+ modem support.
The handset is being offered by Safaricom, an Intel partner and major mobile network operator in Kenya (Vodafone also has a 40 percent stake in it). The aforementioned camera is said to have “advanced imaging capabilities” including a burst mode that can produce seven pictures per second, as well as a video mode that can shoot footage in that all-important 1080p resolution.
The smartphone is aimed at first-time buyers in Kenya and will be priced at Kshs. 10,999, bundled with 500MB of free data. It will be available country-wide in Safaricom stores, although a wider release across other African countries is expected later.

The Yolo is based on the ‘Intel Smartphone Reference Design’, a new hardware blueprint that was shown off by Intel at CES earlier this month. The idea is to help speed up the development time for lower-tier phone manufacturers, allowing them to focus on additional functionality and software. When it was seen in Las Vegas, Engadget reported that the reference smartphone had Gingerbread installed, although in a recent review published by Techweez it’s shown running Ice Cream Sandwich:

Under the hood, the Yolo is powered by an Intel Atom Z2420 processor, complete with Intel’s Hyper Threading Technology that can hit processing speeds of up to 1.2 GHz. Intel says the device will also support FM radio, and have a slot for some kind of expandable memory. Last but not least, the Yolo also has Intel’s XMM 6265 modem for global roaming.

It’s always odd to see a smartphone launched in a very specific country, given that the needs of low-end users in developing markets are often shared. Regardless, Peter Arina, general manager of Safaricom’s Consumer Business Unit, believes they are “redefining” what Kenyans can expect from a smartphone. “The Intel-based Yolo smartphone strikes a unique balance between price and performance – we consider it to be a real breakthrough.”
TheNextWeb