Picture That Motivated Bolt To Break The World Record 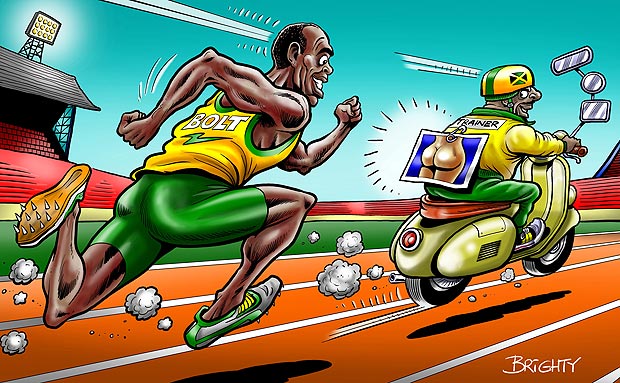 TRACK legend Usain Bolt raced to Olympic gold by thinking of his girlfriend’s BUM, we can reveal.

The fastest man on earth smashed his own record defending his 100m title and then delighted the crowd with his trademark “Lightning Bolt” pose.
But today we can tell for the first time how he was spurred on to the finish line by an image of sexy Megan Edwards’ perfectly-formed bottom.

Junior athlete Megan had sent Bolt a photo of her cute rear before the race, along with the message: “Think of my bum at the finish line lol.” Jamaican superstar Bolt, 26, replied before the August 5 event at London’s Olympic Stadium: “I can do that.”
After 80,000 spectators and millions watching on TV saw him run a blistering 9.63 seconds to claim his first gold medal of the Games, Megan texted to congratulate him.
And he wrote back: “I was thinking of ur ass.”

As he prepared for the 200m final four days later, he asked for ANOTHER snap of her bottom saying: “Need a pic for the 200m more motivation to go fast.”
Megan, 22, forgot to send him one but Bolt still went on to clinch his second gold medal.
And before the 4x100m relay final on August 11, Bolt sent her a message begging AGAIN, this time saying: “Need another pic that will win me a world record.”

Megan obliged with a new picture and Bolt went on to win his third gold of the Games with his Jamaica team-mates — and set a new fastest time.
A close friend of Megan’s said: “She was thrilled to know she had helped Usain get in the right frame of mind to win three golds.
“He is extremely focused but seeing a snap of Megan’s amazing bum must have motivated him.”
In other texts Bolt — who was on a strict sex ban at the time — promised to take Megan out once the Games were over.
The couple finally got to meet up to celebrate on the night of the relay. The friend said: “That was Usain’s last race and they were desperate to see each other. They went clubbing, drank champagne with other stars and had a great night.”
Megan, an office girl from Dartford, Kent, first caught Bolt’s eye last June when she was chosen to model Jamaica’s team kit and appeared on a catwalk with him.
After the Olympics, Bolt, who is worth an estimated £30million, flew her first-class to Jamaica and she spent five days at his mansion.
But Megan called off the romance just before Christmas. The friend said: “She couldn’t handle the distance and him being away all the time. They are still friends.”
Last night Megan said: “Usain and I texted each other all the time and we had lots of fun but that’s all I’m willing to say.” Bolt’s publicist Carole Beckford would say only: “Usain had a tremendous 2012.”
The Sun

Bride Collapses And Gives Birth Just After Saying I Do < Previous
Student Finds Brain Like Object In His KFC Chicken Next >
Recommended stories you may like: