Open Letter To Janet Mbugua.. For Dressing Voluptuously On TV 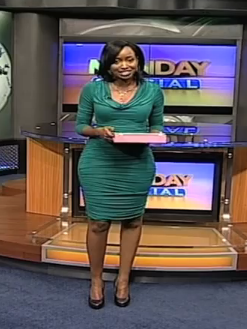 I have attempted to suppress my feelings since Monday 9PM but that effort has been subjected to futility. Yawaa I comprehend that just like lilian muli, u r also matrimonially abducted & as such, I should mutilate any hopes of pursuing your affection. Nevertheless my corneas still detect and appreciate that both of u oozes aesthetics in gigantic proportions, both of you not only radiate but also advertise beauty via minimal effort. Yawaaa indeed it is correct that birds of the same feather locomate in unison.

On that day, Monday 21st January 2013, 2100Hrs The regalia u embedded on ur body laminated your anatomy in a cohesive and jealous manner. It stalked your physique, tracing every contour that is depicted in your fauna. Manners has barred me from oozing positive appreciation towards ur mammary glands in public domain, but your hips will not be accosted similar amnesty. Woman, yawaa flesh has resided in your pelvic areas in an inciting manner; the bulging of ur hips at the periphery of ur posterior ial mass is unanimously seductive, its mere sight alerts the organs that inhabits my loins. i emit appreciation towards the plateau existing in ur front abdominals as ur stomach does not custod overlapping intestines (tyres). Yawaaa u were chiseled yawaaa!!!

Despite the fact that u are vertically endowed thereby raising ur center of gravity hence making u vulnerable to falling…irony has sided with you by condemning my heart to be the one to succumb to gravitational pull. I have fallen. yawaa Because of you, I just imported a plasma 67” 3D spectrum colour television from Australia that is charged with the onus of airing only news that is being relinquished by the tongue that is tethered in close proximity to ur alluring face.

Raila and Kalonzo Taking Belongings To Statehouse, Crazy Picture < Previous
Hilariously Revised Mututho Laws. Next >
Recommended stories you may like: