Messi Angers Fans After Thanking Everyone But Ronaldo During Acceptance Speech 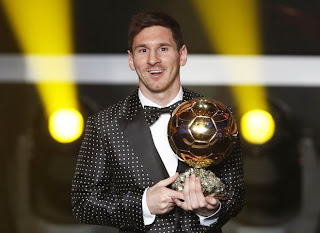 Supporters of Real Madrid star Cristiano Ronaldo were left unimpressed by the Ballon d’Or acceptance speech of Barcelona forward Lionel Messi.
Spanish television station Punto Pelota says the football identities at the ceremony were unhappy with Messi overlooking his £80 million rival in his speech – virtually thanking “everyone in the football world except the Portuguese.”

Observers say the tension between the pair was far greater than last year’s ceremony, and the report claims “you could sense it when they were forced to deal with each other” in the rehearsals.”
Several journalists present were also reportedly unimpressed by Messi’s behaviour in the pre-gala media conference.
Ronaldo was believed to be open and honest in his answers, while it is claimed Messi was disinterested and spent much of his time on his mobile phone.

Columnist Tells Makau Mutua To Stop Exaggerating Consequences of Electing Uhuru Kenyatta < Previous
50 Romantic Things To Do For Your Boyfriend / Girlfriend Next >
Recommended stories you may like: